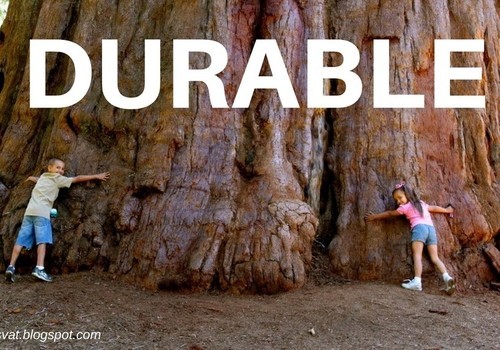 Top TED talker Brene Brown nailed it at the Mom2Summit when she declared: “I’ve never done anything that was worth much unless I was scared shitless and nauseous.”

That’s exactly how I felt stepping onto the red circle at TEDx Tysons in Tysons, Virginia. But as I delivered “Durable Humans are Smarter Than Their Phones,” I was uplifted by the inspiration of a host of brilliant people I want to thank here.

Copious credit goes to Hilarie Cash, co-founder of ReStart, the nation’s first Internet addiction treatment center. Hilarie invited me in to meet people like “Jeff,” the young tech addict whose heartbreaking yet hopeful story you can read about here.

ReStart’s track record proves that simple things like cooking dinner and mopping the floor can help young people break the stranglehold of addiction and return to success in real life. By creating and sustaining Attachment, Hilarie told me in this interview, parents can help kids stave off addiction. From a child’s first day of life through at least their early 20s, the eye contact, touch, and attention of caring adults is essential.

Among Hilarie’s circle of experts is Cris Rowan, a fierce child rights advocate and Canadian pediatric occupational therapist who founded the Zone’in parenting resource center. Cris helped me dial in the concept that technology overuse is causing some parents to detach from their children. Ironically, their kids often fill that void of human solace and support by engaging with technology. Here is Cris’s presentation from the Children’s Screen Time Action Network conference.

Andrew Doan, M.D., PhD is an ophthalmic surgeon with a doctoral degree in neuroscience who himself battled back from a ten-year tech addiction. He now teams up with his wife, Julie Doan, to speak and write on the subject.

Andy gave his nod to my Broccoli versus Broccolini analogy illustrating the scientific discovery that kids who spend too much time engaged with screen media can miss key brain-development milestones.

The idea is that kids who have a well-rounded upbringing with lots of full-sensory experience tend to have a brain more like a broccoli—bushy with rich neural interconnections (pictured below on the left). But kids who spend too much time in a sensory-poor 2-D screen environment may have neural pathways that are pruned and truncated and brains more like a slim broccolini (pictured below right). 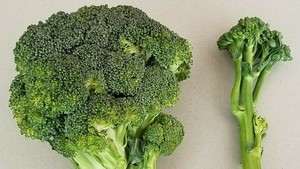 A post Hilarie shared by family therapist and author Marilyn Wedge, PhD opened my eyes to “Virtual Autism.” As Dr. Wedge points out, “New clinical case studies have found that many young children who spend too much screen time—on TV’s, video games, tablets and computers—have symptoms labeled as ‘autism.’” Thankfully, she reveals,  “when parents take away the screens for a few months, the child’s symptoms disappear.”

I met other folks studying Virtual Autism at the Children’s Screen Time Action Network conference and wrote about what I learned here.

When smartphones became ubiquitous after 2007, I intuitively felt their pull on us, but didn’t learn until 2015 that some technology is willfully designed to psychologically entrap.

The news came from former Google design ethicist Tristan Harris, who has since left the company to become what some call “the conscience of the tech industry” and a much-watched TED speaker. After meeting Tristan at a mindfulness-and-technology meetup near Silicon Valley, I wrote this.

I’m quite proud that Josh Stillman and his TEDxTysons team arranged for my talk to lead directly into a replay of Tristan’s latest TED speech. 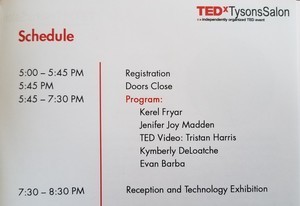 Like Hilarie, Richard Louv is also a renowned convener, but around a term he coined: Nature Deficit Disorder—the sad brew of ennui and unhealthiness that washes over kids who don’t spend enough time outdoors. Rich’s concepts began taking root in 2008 after he published his seminal Last Child in the Woods: Saving our Children from Nature-Deficit Disorder.

I met Angela Hanscom at the Children and Nature Network gathering of those inspired by Louv. Angela is also an occupational therapist who sees many kids in her practice who have less core strength and are much more emotionally fragile than kids only a decade ago.

In her book, Balanced and Barefoot: How Unrestricted Outdoor Play Makes for Strong, Confident, and Capable Children, Angela explains what happens when kids are too sedentary: “When you restrict movement, things get stuck. There are problems with balance and coordination. If you aren’t moving enough, your vestibular system will atrophy, too, and you are more prone to falls.”

On the bright side, though, many studies now prove that kids who have plenty of self-directed outdoor play are not only physically stronger, they also learn to cooperate and become more accepting of kids who are different from themselves. As Rich Louv says in my most-read Durable Human post, self-directed play “has something to do with developing entrepreneurs in the future.”

As for how blue-footed boobies flew into my TEDx talk, I credit the Lindblad Expedition to the Galapagos Islands where National Geographic naturalists taught me and other landlubbers to snorkel with sharks. By pairing me with a safety buddy I’d never met before, I came to appreciate our precious human ability to communicate wordlessly through eye contact and how we can use our Sixth Sense for survival. 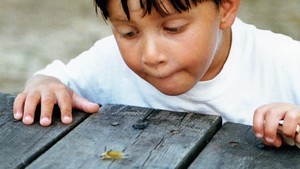 My youngest child, Reilly, is also pictured in my talk—all eyes and curiosity for a busy cricket. He was on the same time-expansive, free-wheeling childhood trajectory as his sister was ten years before him—until he became more enmeshed with screens.

My middle child ended up studying Design in college. I credit him with helping me understand that, in order to be creative, one must first be curious.

While all these wonderful people contributed to my talk, the “Durable Human” concept is all mine. I launched the blog in 2009 and four years later published The Durable Human Manifesto: Practical Wisdom for Living and Parenting in the Digital Age and declared: “In a world of tireless, mass-produced gadgets, we humans—like diamonds—must be durable.” To be Durable is to have the fortitude to withstand the new pressures brought by technology use and the wisdom to preserve and protect your unique human abilities.

My second book, How To Be a Durable Human: Revive and Thrive in the Digital Age Through the Power of Self-Design, is filled with practical ways to help you be more durable and live in better harmony with your technology. It’s all about striving for the Triple Crown of Durability which I define as developing (and keeping) self-reliance skills, building genuine relationships with other people, and following your own particular brand of curiosity.

I love what Rich Louv says about Durable:

The word ‘resilience’ is in, especially considering climate change, but I’ve never been drawn to that word. It suggests a life of being knocked down and standing up again and it again—and it doesn’t suggest a picture of progress, but of survival. I like the word ‘durable’ better. It’s not a ‘re’ word.

Watch “Durable Humans are Smarter Than Their Phones” for yourself right here:

P.s.: Special thanks to Liliana Usvat for letting me convey Durable through her gorgeous photo of kids hugging a giant sequoia in California’s Sequoia National Forest.

About the author: Jenifer Joy Madden is a health journalist, digital media professor, tech hygienist, and inveterate parent of three durable young adults. Her words have informed millions on news outlets including ABC News to Tech Republic to The Washington Post, and in her books, How To Be a Durable Human: Revive and Thrive in the Digital Age Through the Power of Self-Design and The Durable Human Manifesto: Practical Wisdom for Living and Parenting in the Digital World.