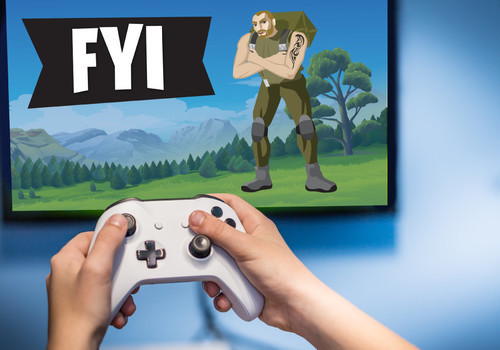 Fortnite: Battle Royale is a free-to-play, third-person-action online video game where players fight to the death in an ever-changing combat area. Battle Royale has been called the kids’ Call of Duty, or a cross between Minecraft and The Hunger Games. The point of Battle Royale is to be the last player standing after knocking off up to 99 other players.

In early 2018, Battle Royale became a true game-changer when it jumped to mobile. Now the game can be played not only on Internet-connected game consoles, desktops and laptops, but also on many smartphones and tablets, too. That’s why the game is seeping into the hallways, lunchrooms, and classrooms of schools where phones are allowed or students use tablets or laptops.

A tamer Fortnite mode, Save the World, first appeared in 2017. It’s played solo on a console or computer where outsize cartoonish characters band together to fight zombie-like monsters. Battle Royale can be played solo, but also in pairs or squads of four. Players can talk and listen to others using the game’s Chat feature in all platforms except mobile (for now).

Although Fortnite starts out as free, play-enhancing items can be bought inside the game. A paid upgrade is also available.

As in Minecraft, Fortnite players can use their ingenuity to build defenses and come to each other’s aid. As a parent who’s watched her child play writes on the Scary Mommy Facebook page, “If you take off on your own, you’re most likely to die. You have to learn to cooperate with your teammates. A great lifeskill.”

Thankfully, too, the game is not endless. It’s played in 20-minute matches.

So what’s the problem?

For one thing, the game is all about weapons and violence. Even though blood doesn’t gush when players are eliminated, more and more research shows that when kids direct on-screen violence, they can become more aggressive and less compassionate in real life.

Secondly, because it’s brand new, Fortnite: Battle Royale is the beneficiary of all that game makers have ever learned about designing video games. That means Fortnite is at the very pinnacle of “persuasive design,” the science of keeping people engaged with technology. So it’s easier than ever for players to get hooked.

What’s a Parent to Do?

Abide by the Ratings

Fortnite: Battle Royale involves player-directed mortal combat and unfiltered battle chatter. For that reason, the game is rated TEEN from the Entertainment Software Rating Board. The child advocacy game and app reviewer Common Sense Media agrees that the content is “generally suitable” for kids ages 13 and up. So, even if you think your 10-year-old is way precocious, the experts believe his or her brain and emotional makeup may not be developmentally ready for such an intense experience that can be in the company of kid and adult strangers.

Understand What You’re Getting Into

Even though Fortnite: Battle Royale is played in 20-minute sessions, another session can instantly follow, so it’s easy to binge-play, as it is to binge-watch Netflix or YouTube.

Also, because Fortnite: Battle Royale is designed to keep players in the game, if you allow it into your child’s life, you not only invite conflict between the two of you, you also green light a potential source of addiction.

In the fight over Battle, it’s easy to forget about balance and that kids also need to get exercise, converse with family, etc. According to child psychologists, setting limits on screen use and content is essential for kids to become well-rounded, self-directed, durable adults.

In family studies where parents do set boundaries, “Kids got better sleep, lowered their risk of obesity, and got better grades. Plus teachers saw better behavior and less aggressive behavior in classroom,” according to media addiction expert and developmental psychologist  Douglas Gentile, speaking at the Children’s Screen-Time Action Network conference.

The American Academy of Pediatrics recommends that for kids’ health and well-being, those over age five should not use screen-based entertainment for more than two hours a day. (Screen time exposure should be less or none in kids younger than five.) Lest we forget, some free, non-tech fun group alternatives are flashlight tag and riding bikes.

If you do OK Fortnite, tell your kids ahead of time how long they can play (and set a timer to remind you). You can also adjust the settings on Chat and set your own limits on in-game purchasing.

If you allow play on a phone or tablet, you can also use parental control apps on your own phone such as Kidslox to help them manage their gaming time and other activity on the device.

To help your family establish sensible boundaries around tech in general, I highly recommend the AAP’s Family Media Plan. Use it with the accompanying Media Time Calculator to sit down with your child to plan a balanced day. The National PTA Smart Talk is helpful, too.

Also, check out this free tool for planning your family’s time wisely:

To understand better how screen media addiction can damage the life of a young person or adult, please read this. Also, know the red flags that someone you love is becoming addicted.

Finally, if you have a tip or trick around tech that works in your family, please share so we can all become more durable humans.

About the author: Jenifer Joy Madden is a health journalist, digital media professor, tech hygienist, and inveterate parent of three durable young adults. Her words have informed millions on news outlets including ABC News, The Washington Post, and in her books, How To Be a Durable Human: Revive and Thrive in the Digital Age Through the Power of Self-Design and The Durable Human Manifesto: Practical Wisdom for Living and Parenting in the Digital World.