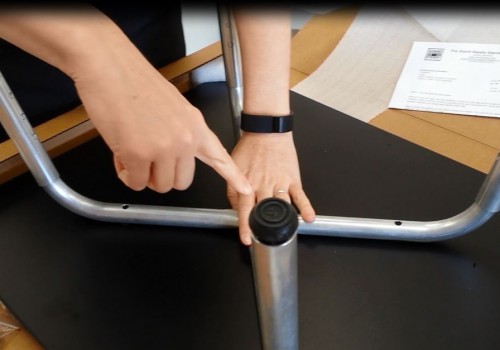 Since word got out a few years ago that sitting too much isn’t healthy, products have become available that help people on the job, but some seem more fitting for a CEO. It took one of the many who work in cubicles to come up with a solution that works for them. This is her story.

Day Martin used to be a data analyst, a “knowledge worker,” as she likes to call people who make money using their minds, almost always while they’re sitting down. “They sit there all day, every day,” as she says. “They have to. It’s their job.”

That’s what she was doing at her job in suburban Washington, D.C. until one day, she had a car accident. When she recovered, she noticed something about her back: “I just had pain when I went to work.”

When she checked online, the Internet suggested she try a standing desk. But there was a problem: nothing on the market allowed her to stand comfortably inside her cubicle. “I thought it was obvious, but it wasn’t available.”

So Day decided to make one herself. At first, she hacked together some cardboard. That helped, but didn’t fit the office aesthetic. “People said stuff like, ‘How long are those boxes going to be sitting on your desk for?’”

Then, with assistance from her father-in-law the home builder, she made some sturdier prototypes. “My colleagues loved them. I was shocked at how many people have their back pain stories – I had no idea.”

To build her final design, she sourced parts from within the U.S. “What I love about American manufacturing is that it’s so much easier. I could get things in the mail in a couple of days.” In practically no time, the Stand Steady desk was born, as Day proudly reports, “It was fifteen months from the accident to the product going live.” 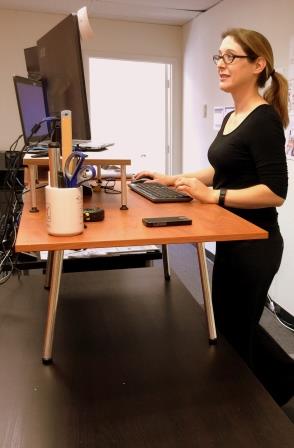 Day made sure that building her desk is easy. She wants knowledge workers to “get it,” right out of the box: “I didn’t want this to be a big three-hour project with her heels and skirt trying to figure it out.”

That’s why Stand Steady is simple to assemble, right down to the penny. Seriously, you have to watch this one minute video to see what she does with the penny:

I say a product has a “durable design” if it helps humans to be more durable, which Merriam-Webster defines as “able to exist a long time without significant deterioration.” Day’s desk fits that bill.

As I wrote in my first post about her, Stand Steady helps people to be physically durable because they avoid the effects prolonged sitting has on metabolism, bone mineral content, and vascular health. You burn between 20 and 40 calories an hour when you work standing up and, as Day reports, tend to be more active in general: “You’re already in motion. You’re likely to go places – moving around, get a glass of water, go ask someone a question.” Plus, as she hoped, using her desk can relieve back pain.

Standing while you work also benefits the mind because, in Day’s words, it “helps collaboration.” Rather than just sticking inside your cubicle, you’re more likely to walk over and talk to a colleague.

It’s also easier to gather around a screen when you’re standing, which is nigh impossible if everyone’s in a chair. So Day’s desk also boosts the spirit because, as she states so simply, “Interacting live with people helps us all feel better.”

A hallmark of being a durable human (and a jewel in what I call in The Durable Human Manifesto, “The Triple Crown of Durability”) is following your curiosity, which Day did: “I wanted a product that would allow me to work. What was I gonna do? Chose between my health and my job? No one should have to make that choice.”  Well, many, many people have – but only she made the choice to shatter the status quo. 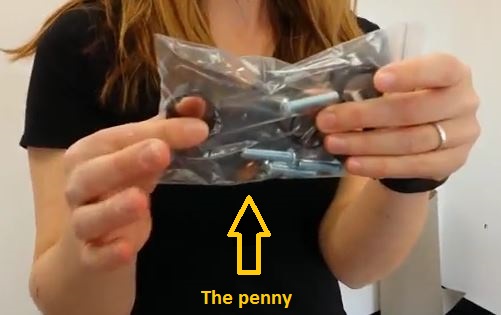 Another hallmark of being a durable human is to have skills, which are hard to retain in a world of helpful apps and machines. That’s why I love the penny so much. It lets you put something together with your own two hands. As Day declares, “I want people to feel like they can do it themselves because it’s empowering to build something.” (WOOT WOOT!)

Now that Day herself has created something from scratch, she is helping others to do the same: “I am doing manufacturing, design, patents – trying to be a role model for girls.” Although her product is no-tech (it doesn’t plug in), in order to make it she had to tap into science, technology, engineering and math. She wants girls to embrace STEM, even if they don’t ace all their classes. “Women react differently to criticism. They get a B and they drop out.”

“It’s ok to get a B, OK to be in the top half of the class. Don’t quit just because you’re not acing it.

When we don’t encourage them to do this kind of work – look what they’re missing out on.” 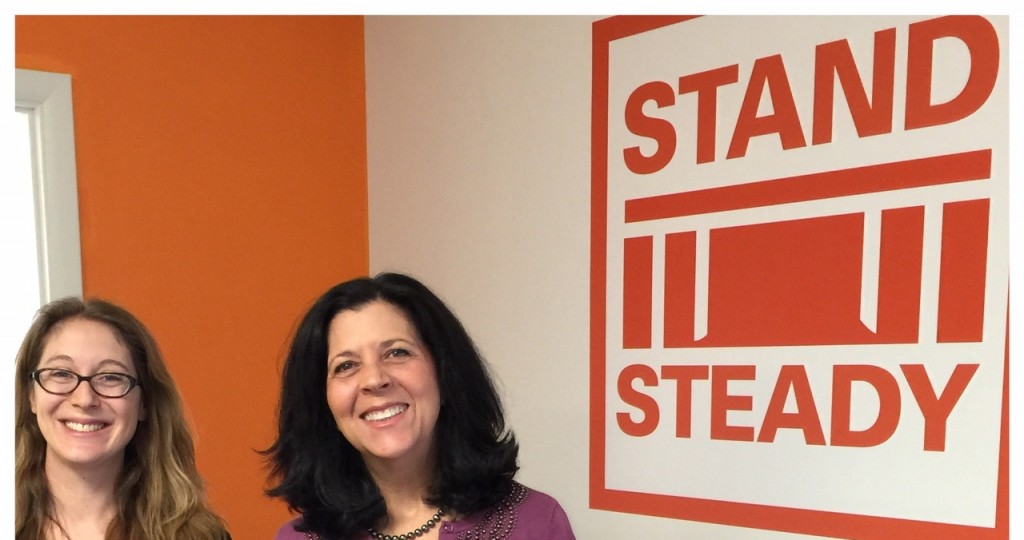 Day Martin (left) and I at Stand Steady HQ in Fairfax, Virginia

For more on Day Martin’s and other durable human designs — and great tips for how to live in harmony with your technology — read How To Be a Durable Human: Revive and Thrive in the Digital Age Through the Power of Self-Design.

Sign up here to get more Durable Human posts, news, and freebies and learn more about this author on Google+

Thanks for bringing this to my attention, JJ. As someone that works from home, I’m going to have to try this.