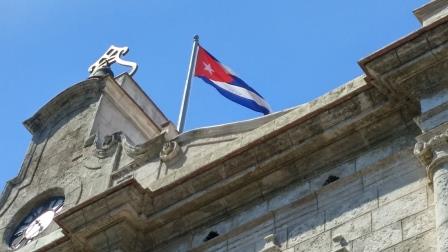 When it comes to being able to discover Cuba, I have to give credit to President Clinton. The “People to People” program started in his administration does foster “meaningful interactions between you and individuals in Cuba.” It’s also the only way sixteen other Americans and I could legally visit.

“This week, you’ll be creating your own truth about the country,” our guide told us. A smart, attractive Cuban in her late twenties, her American-accented English was nearly flawless, as was her knowledge of our customs. But, though she’s been to Italy, she can’t get a visa to the USA.

I’ll have highlights of our tour’s jam-packed schedule, but first I need to clear up some of my Cuba preconceptions.

While everyone in our group admitted they were there to see the country “before it changes,” it was quickly apparent that, despite those old cars, Cuba is not stuck in the ’50s. 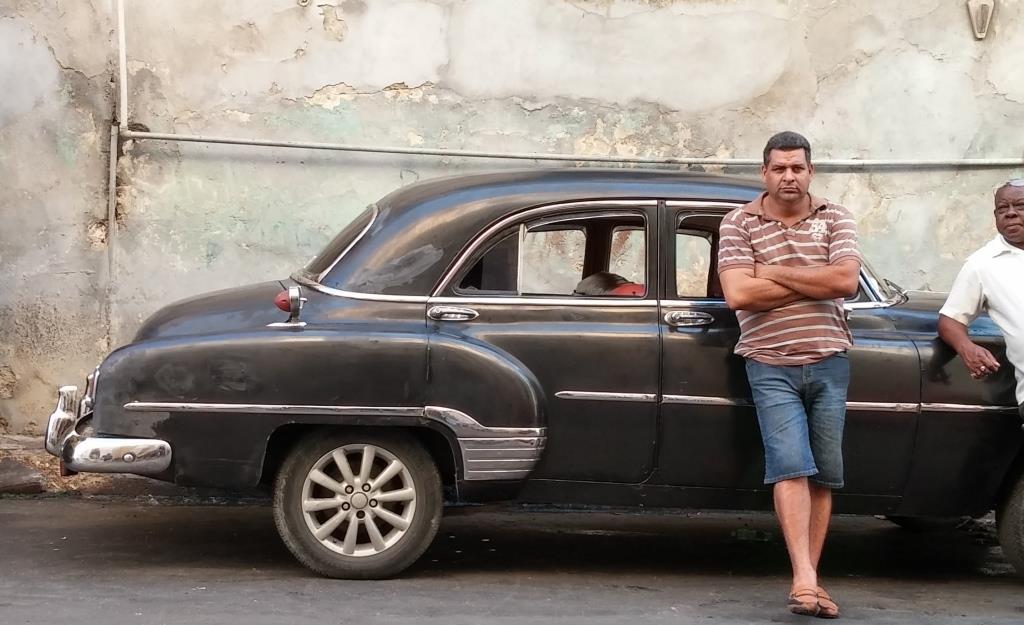 In fact, Cubans call the vehicles “hybrids” since the outer shells are original, but the engines are rebuilt with modern parts. Because the iconic rides are used as taxis, they are tourist attractions in themselves and tips supplement drivers’ meager state incomes.

I also naively assumed Cubans live a pre-Internet existence. But on a stroll our first night in Havana, we came upon scores of people on curbs and benches, hunched over glowing screens of smart phones and laptops. 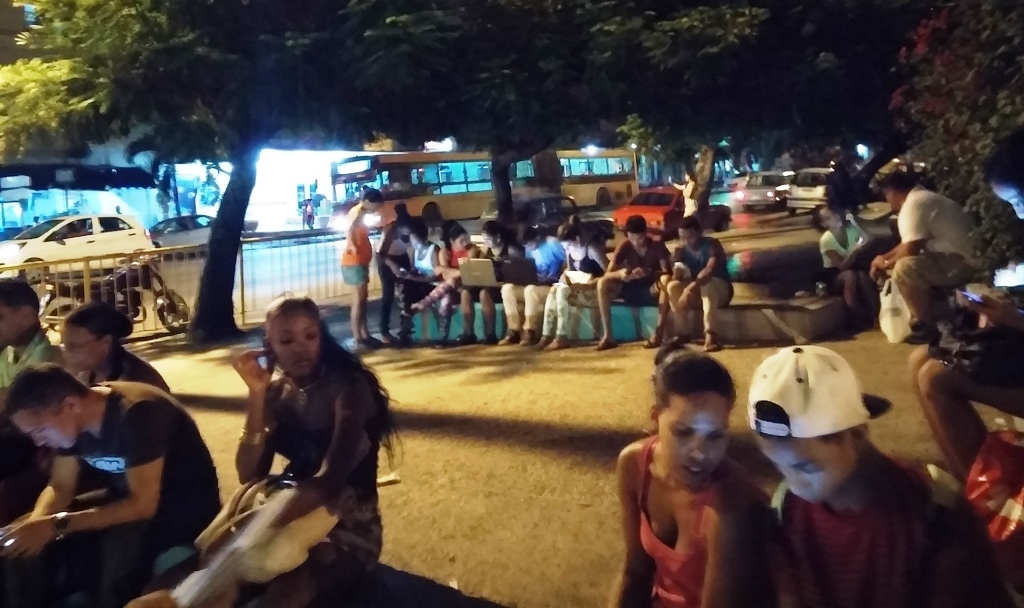 Universities in Cuba have been wired for a while now, but this year middle and high schools are going online. Thanks to the recent arrival of Venezuelan fiber optics, some professors have the Internet at home. But most other people, if they can afford it, need to pay for a password they can use only at cyber cafes and outdoor Wi-fi hotspots.

On a tour of a downtown cigar factory, where stogies are still carefully rolled by rows and rows of workers, we noticed a few of the younger ones passed the time listening to devices. But, considering the government pays the average citizen the equivalent of only twenty dollars a  month, most people can’t afford a digital existence, nor to buy much of anything. “Cuba is a country that has a lot of material shortages,” our guide understated.

Cuban families are still required to use ration books to buy meager supplies of staples that are allocated by the government. 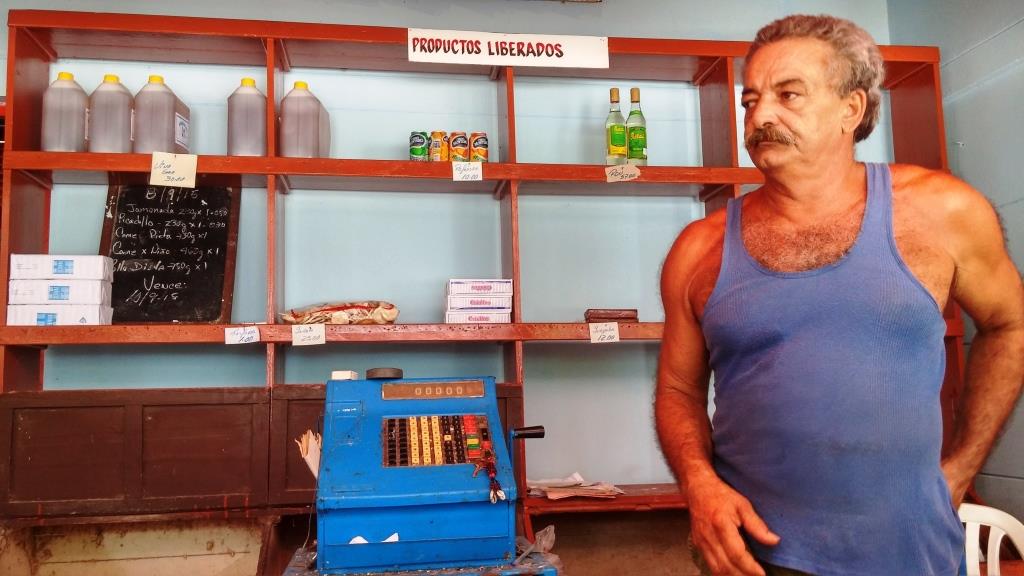 In Havana, where we spent most of our time, the lack of expendable income was evident.  With neither the funds for nor the availability of clothes dryers, people hang wash from balconies and lines. Except in diplomatic and tourist areas, formerly-grand buildings where people now live and work have fallen into disrepair. 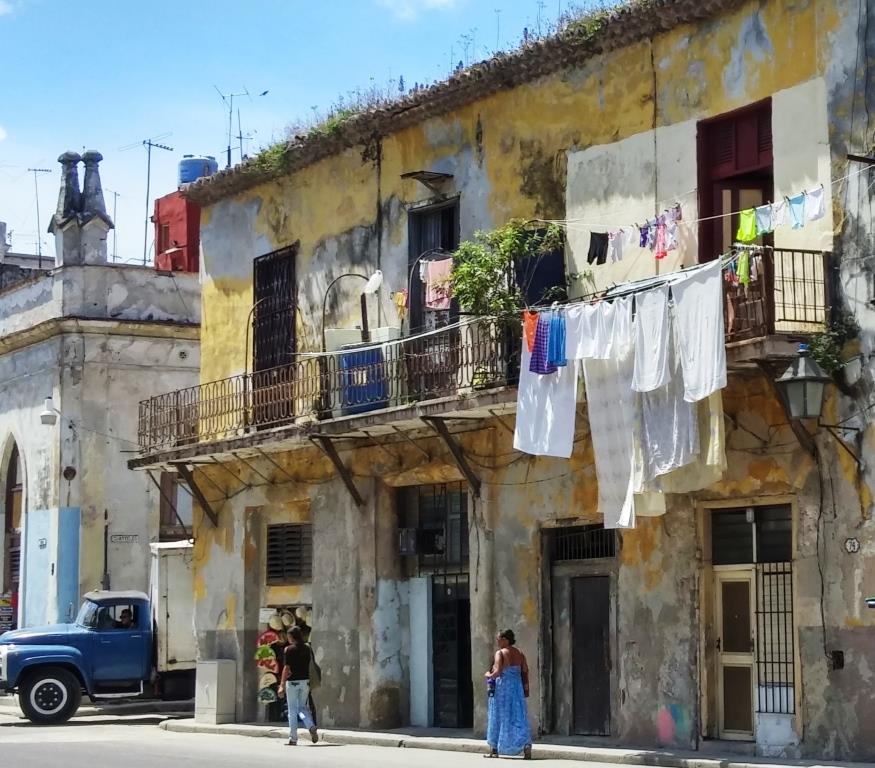 While we were there, virtually no boats—pleasure or otherwise—plied the harbor. 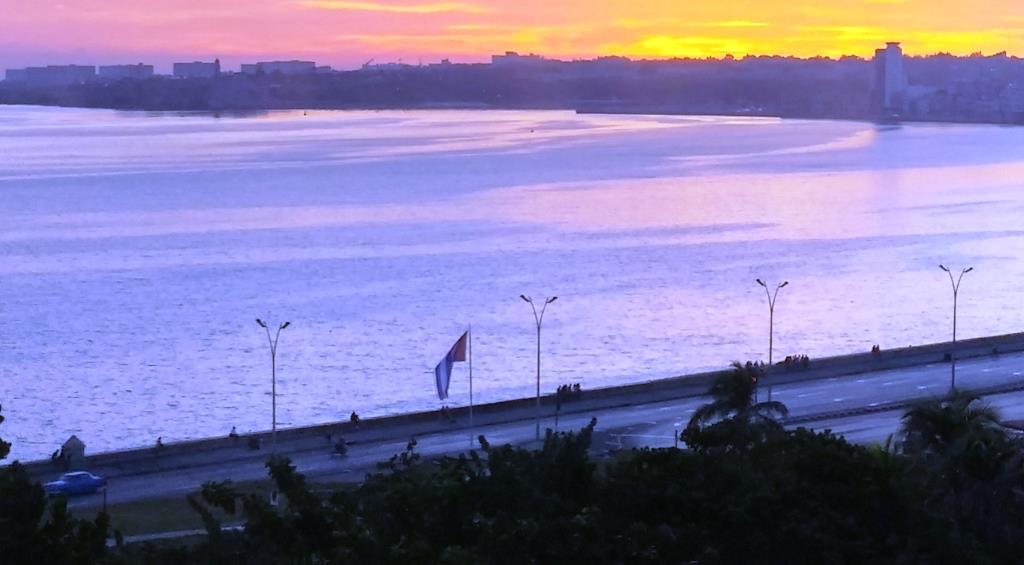 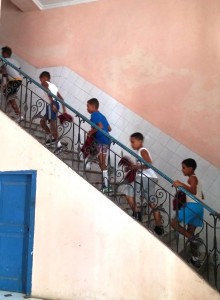 Wikipedia was right, though, that the Cuban government places a high priority on health and education. Kids go to school for free and generally can read by age seven.

We saw first-hand, in a tiny clinic well outside Havana, that “medical personnel are responsible for the health of neighborhoods,” as it says in Primary Health Care in Cuba: The Other Revolution. 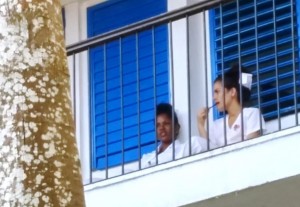 Mortality rates for mothers and children are equal to or lower than those in more developed nations, including the U.S.

Vocal Luna, the only professional women’s choir in the country, treated our group to an enchanting concert, but one of the founders wasn’t there because she was on her one-year maternity leave.  (Watch Vocal Luna here.)

We learned from a top Cuban economist that the government wants to change its “central plan economy” “The state shouldn’t be the owner and manager of everything,” he told us in a mini-lecture. Instead, Cuba needs a “knowledge-based economy” that supports entrepreneurs, small businesses and joint ventures, not just agriculture and tourism. The U.S. embargo, he said, “is the most significant brake” on Cuba’s future.

We were so busy, there was little time to mingle with the local people, but I did manage to ask a few of my questions.

Pride in country came through in this comment: “An amazing mix of different cultures in just one. Totally rich and diverse.”

But there was also deep frustration: “Our economic wages are ridiculous. Our economy is shot.”

Hopes are clearly pinned on the new rapprochement with America, but there is also intense fear of “too many concessions without guarantees for Cuban peoples’ freedom.”

An American-born Cuban suggested reasoning he thought might work: “We need the U.S.’s help. Call your Congressman and say: ‘I want to travel to Cuba whenever I want. Lift the embargo.'” 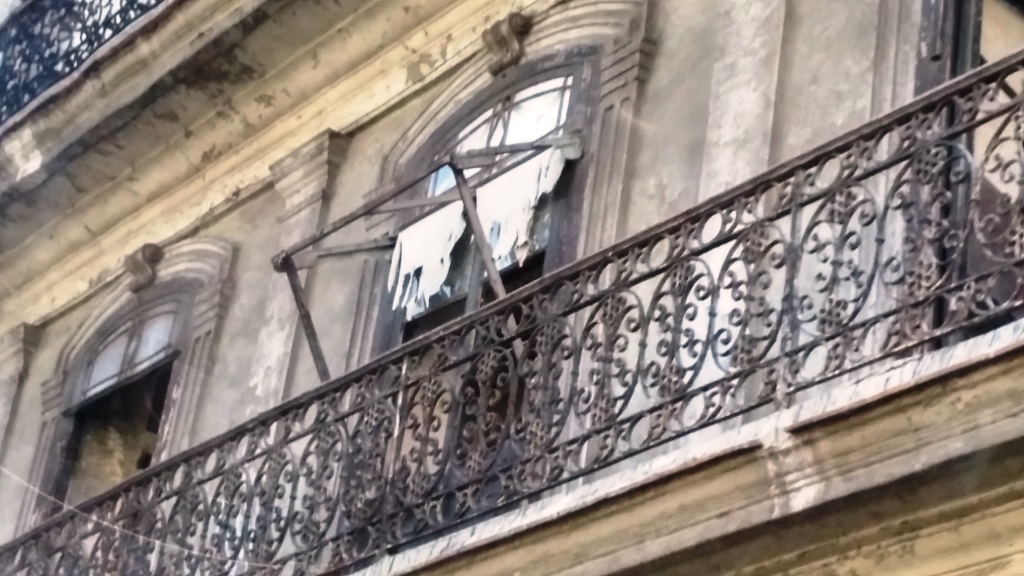 In How To Be a Durable Human, I write about the Triple Crown of Durability—the three qualities you need to be an effective person in an increasingly complex world: self-reliance, connectedness, and curiosity. 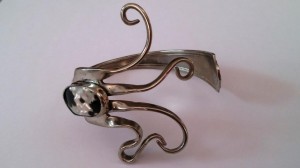 This bracelet is made from a fork.

Cubans are clearly Triple Crown winners as they cleverly use their skills to cope with the lack of nails, cellphones, and other products Americans find indispensable.

They cherish relationships, especially among families, so many of whom were torn apart by the 1959 revolution. Spirituality persists and, in some ways, has been enriched by past oppression.

Cubans certainly follow their curiosity in art, music, performance, and other pursuits—at least as far as their lack of freedom will allow. 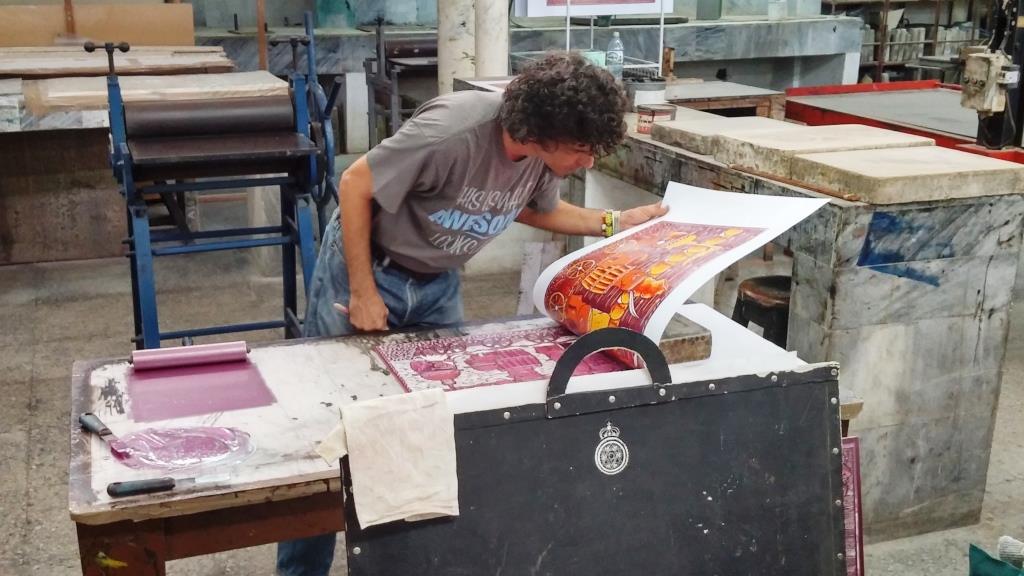 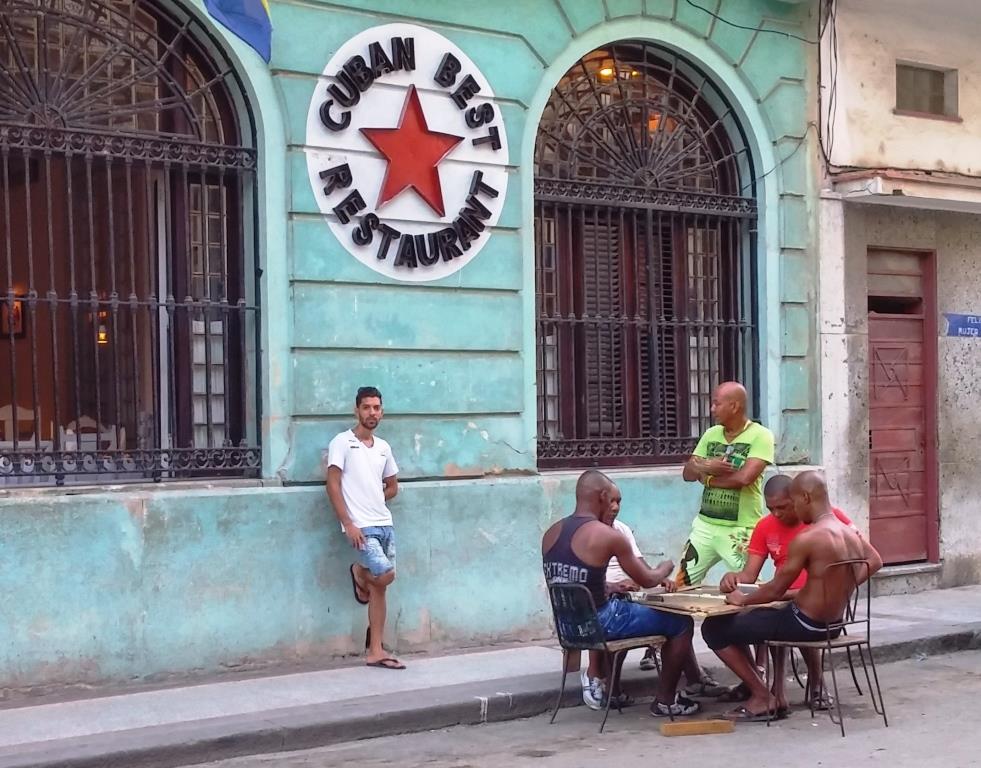 From what I observed, if and when change comes, the Cuban people—hardy, smart, and durable—are ready to catch the wave. 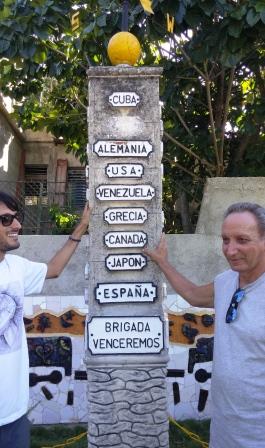 Jenifer Joy Madden is a health journalist and digital media professor. Her words have informed millions on news outlets including ABC News, The Washington Post, and in her books, How To Be a Durable Human: Revive and Thrive in the Digital Age Through the Power of Self-Design and The Durable Human Manifesto: Practical Wisdom for Living and Parenting in the Digital World.

Download a free copy of The Durable Human Manifesto here.

Learn more about the author on Google+. All photos and the video by Jenifer Joy Madden