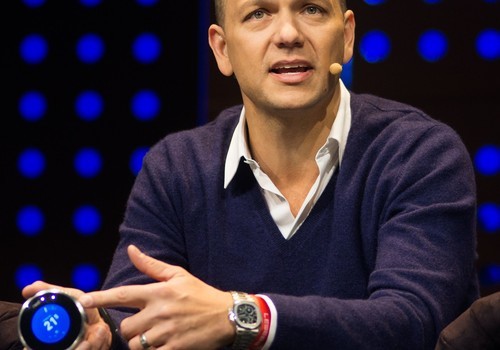 Now that he has kids of his own, Tony Fadell is thinking about the unintended consequences of the tools he helped create. “We allow this stuff in our lives in a way that may not be working for us,” Fadell told co-host Anderson Cooper and the crowd at Mindfulness in America, the first Wisdom 2.0 tech-in-perspective summit held in New York.

Bear in mind that Fadell is not your average everyday person, but a true living legend who dreamed up some of the world’s most-used consumer products, including the iPod, Nest thermostat, and world-changing, beloved, attention-grubbing iPhone. But there he was, saying, “We need to pull control back to ourselves.”

To help us gain that control, Fadell thinks our gadgets should report on our usage patterns. “We have zero data about our habits on these devices.” After he suggested people deserve to know their “daily life digitally as well as physically,” the crowd broke into applause.

Fadell believes you should also be able to set your phone to do only one task, as on a Kindle E-reader where all you can do is read. If users aren’t given such controls, Fadell warns, tech companies risk being regulated. He imagines a consumer backlash leading to something like this:

Calling himself out as a recovering sugar and digital addict, Fadell worries about how adults use “the always-on nanny” to babysit. He says kids need oversight and rules when using powerful devices like smartphones: “Don’t give them the tools without any boundaries.” He uses Circle to monitor his kids’ tech usage, set time limits, and get “a crude form of data to see what’s happening.”

A man after my own heart, he agrees kids need time to do things that don’t involve devices: “These are all-consuming if we let them be.” He shares the Durable Human attitude that home environments should be designed so kids can learn healthy tech habits. For instance, he agrees with former Google Design Ethicist Tristan Harris and me that – to preserve sleep, relationships, and time for contemplation – phones should be charged out of the bedroom, such as in the kitchen.

Fadell himself took a partial tech breather over the summer when he didn’t check email. Year-round, he recommends tech-free Sundays.

After creating the iPod, Fadell helped dial in the iPhone’s revolutionary interface. He waxed nostalgic for the good old days working alongside Steve Jobs. “Apple was a different place pre-iPhone. After that, it went crazy with extra communications.” Now that he runs the investment and advisory firm Future Shape, and the crazy-long hours he worked sometimes at Apple, Nest, and Google are behind him, he wonders: “What happens if your company said, on the corporate server, you can’t send or receive email outside of work hours?”

These days, Fadell cherishes down time with his kids, doing simple things like taking stuff apart and putting it back together, just like he did with his grandfather.

Don’t overschedule your kids. Make sure they get bored so they discover who they are and what they like.

Or, what I say now that Jobs is gone: kids need to know their own operating systems before they spend much time with all the others.

Referring to Nicholas Negroponte’s prescient Being Digital, Fadell says it’s time someone wrote a book, Being Analog. In fact, I already have, but with a different title. To be durable is to maximize your personal superpowers, despite and because of the pressures we face as a species. If we want to remain effective players in society in the face of AI, robots and everything else, it’s up to us to actively maintain our human-only assets, including – to Borrow Fadell’s words – the “instincts, emotions, intuition, that machines will never have.”

DurableHuman.com founder Jenifer Joy Madden is a health journalist, digital media adjunct professor, and author of How To Be a Durable Human: Revive and Thrive in the Digital Age Through the Power of Self-Design. Her work has informed millions on news outlets including ABC News, The Washington Post, Readers Digest, Tech Republic, Thrive Global, and many others.