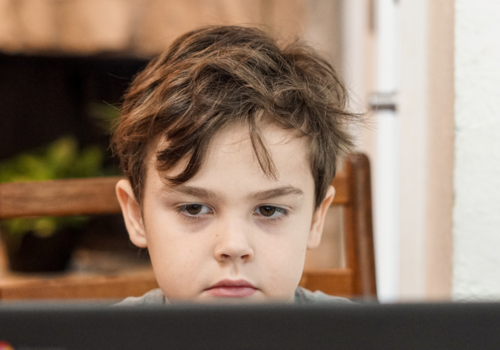 Stress in the household was a main reason why many children developed problematic media use during the height of the pandemic. Household screen rules had little effect on media usage, according to new research.

Emily Kroshus had three children under age 6 at the time of the pandemic lockdowns. She remembers how she coped with online work meetings. “I would turn to screens.” And not to co-view and discuss content with her children. “It’s more like: ‘please, can I hypnotize you for an hour?’”

“I’m not proud of that,” the child behavioral researcher recalls. “And I don’t think I’m alone.”

Curiosity prompted Kroshus and her lab at Seattle Children’s Research Institute to survey other parents in the fall of 2020. A diverse group of 1,000 American families responded, each with at least one child between the age of 6 and 17.

According to the survey results published in the journal Pediatrics, one in three children displayed “problematic media use,” which Kroshus describes as “the child is unwilling or unable to stop using media.”

About one in three households had rules around media use, such as keeping devices out of the bedroom at night and not bringing screens to meals. But did those rules prevent problematic use of phones, laptops and computers?

“The answer is no,” says Kroshus. “Rules didn’t make a difference. What mattered was how stressed the parents were.”

By May of 2020, tweens and young teens were spending 8 hours a day online—twice as much time as before the pandemic. At the same time, children’s mental health was suffering. A survey published in JAMA Network found that 1 in 4 young people around the world had symptoms of depression and 1 in 5 youth were clinically anxious.

Using screens was a way to cope. “Adolescents experiencing stress and poor mental health may use screens to manage negative feelings or withdraw from stressors,” according to a 2021 research letter to JAMA Pediatrics.

At the same time, many parents—facing spotty or no childcare and dwindling resources—turned to screens to get by.

Factors most associated with kids’ problematic media use were whether parents were employed full-time, if they worked from home, had less formal education, or high levels of psychological distress.

That’s the biggest takeaway from the survey, says Kroshus: “We need to be more equitably supporting families. We need to be making it easier for families to have access to affordable childcare. We need to provide adequate leave and flexibility.”

As the Pediatrics report on her survey states,

“Problematic media use may be a sign of the family lacking functionality or well-being and they may need help.”

Jason Nagata, M.D., Assistant Professor of Pediatrics at University of California San Francisco, was an author of the screentime use research letter in JAMA Pediatrics.

In an email to The Durable Human, Nagata writes that even though many activities are back in person, he believes screen use remains “higher than pre-pandemic levels.”

To guard against mental health risks, Nagata advises that parents set screentime limits and “regularly talk to their teens about screentime usage and develop a family media use plan.”

The American Academy of Pediatrics free online Family Media Plan is meant “to help you and your children set media priorities.”

The plan guides caregivers to think through when, by whom, and why media is used in the household and to come up with their own guidelines for maintaining family well-being, online and off.

“Others have found that, particularly for younger kids, rules are helpful,” observes Emily Kroshus. “I think the issue is when you get to teens and parents can set rules, but then it’s unclear whether or not they’re followed.”

Kroshus and Pediatrics editor Dimitri Christakis, M.D. are meeting with teen advisers to get their take on how to reduce problematic media use and best help families. “What they’ve been telling us is it’s less about rules and parents setting rules than it is about helping them be leaders in managing their own media use,” says Kroshus.

One young consultant buries her phone under pillows in the closet so she can concentrate on homework. “It’s something that they all expressed wrestling with and wanting to not eliminate, but keep in its appropriate place,” Kroshus reports.

Although she and Christakis won’t be ready to draw conclusions for another year, Kroshus believes parents can make good progress before then: “Oh, absolutely. You don’t need a web-based intervention to do that.”

Based on what she’s learned so far from her teen advisers, some parents “don’t do a great job of learning from [their kids] or asking open-ended questions.” As Kroshus points out, “What they really want parents to do is raise the topic without it being a lecture or leading immediately to rules, but asking them about different social media and asking them what they think is a good idea.”

Kids draw their own conclusions about how their parents engage with technology. “The word they’ve often used to describe parent media use is their parents being ‘hypocritical,’” observes Kroshus. They place rigid rules, then “stay up too late, looking at social media on their phones or ignoring their family during dinner with work emails.”

Dr. Nagata agrees that “parents should act as role models for their children with their own screen time practices.”

A global look at the rise of depression and anxiety among children during the pandemic finds that kids who followed household routines fared better. As researchers wrote in JAMA Pediatrics, parents should “implement consistent and predictable routines around schoolwork, sleep, screen use, and physical activity.”

As for avoiding problematic media use, it’s about “taking a truly collaborative, curious, and non-directive approach to the communication,” concludes Kroshus.

When adopting new household habits around media use, success may depend on getting the buy-in from all family members. Holding a family meeting can be a good first step in the process.

Consider tackling just one new household habit. There are 9 to consider in the Durable Family Pledge:

Jenifer Joy Madden is the founder of DurableHuman.com, author of How to Be a Durable Human: Revive and Thrive in the Digital Age Through the Power of Self-Design, a certified digital wellness educator, and the mother of three grownup practicing durable humans.