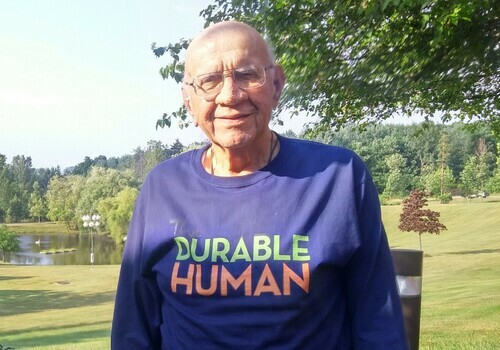 Especially with the arrival of ChatGPT and other artificially intelligent helpers, if you want to be a durable human, you need to know how you differ from machines.

For starters, you are completely one-of-a-kind, whereas machines can be duplicated endlessly. You’re also a powerhouse of resources, starting with your masterful palette of senses. Sure, that’s the Famous Five, but also intuition, compassion, humor, and muscle memory, to name just a few. Children embody the all-important sense of wonder. (Read more in The Durable Human Manifesto)

Unlike what can be the seesaw of resilient, if you are durable, you are consistently active and effective for as long as possible.

Being a fully expressed “Durable Human” is an ideal. Like playing golf, you never quite reach perfection. But my dad came close.

A Mind of His Own

Consider how he lived just one day we were together in October 2022. He was 98 ¾ years old. It would have been the 75th anniversary of marrying my mom, who had passed away 10 years before.

As he did first thing each morning, my dad read two newspapers. Later, he’d watch the evening news and often recorded other news, information, or entertainment shows to view at his convenience.

Sometimes he was troubled by what he read or saw, but he had a neat trick for staying on the bright side.

He played a jazz all-music channel on his TV. He often said he’d go stir crazy in the silence without his music, which was on and off from first thing in the morning until he went to bed at night.

By thoughtfully choosing how he spent his time, Dad displayed his sense of AUTONOMY.

Aligning with the Times

We had planned to go to church for a mass in memory of my mom. I checked the schedule and mentioned an earlier mass would be livestreamed. “We’ll go to that one!” he declared.

Watching him peer at my laptop, I had to exclaim, “You’re a Jetson!”, as in the Jetsons 1960s cartoon TV show about a “space-age family”.

The world has transformed since his horse-drawn youth, when he worked on the family farm. My dad was ever ADAPTIVE.

He managed pretty well with his desktop, iPad, Kindle, and flip phone, but saved some tech-related tasks for when I came to visit.

That day, he handed me a product review he had torn from a magazine. This would be a wedding gift for my youngest son and his betrothed. Dad had looked at their online gift registry, but what they really needed was an automatic bread maker. It not only whipped up several types of bread, but the jelly to go on top.

That order accomplished, he wanted some books from a catalog. Since he churns through at least a book a week, it makes sense he’d want these for my daughter’s little one: Read to Your Baby Every Day and Read to Your Toddler Every Day. My daughter lives nearby, so I could get to those any time. But he insisted I have copies for my reference library. That was his sense of GENEROSITY.

Last time I visited, he asked me to show him Twitter. With several discomfiting tweets storming at that moment, we didn’t stay long. This time, he announced he would like an account, which I promptly opened for him. He wanted to “keep an eye on Elon.”

For lunch, we shared the Beyond Meat “meatballs” I brought from home. He was always happy to try something new, like medicinal marijuana a few years before. Always the physician, Dr. Joy (his real name) wanted to test it on his sore knees. He got a card and went to the dispensary. After trying what they gave him, then trying some more, he declared, “It didn’t do anything for me.” But he had followed his human sense of CURIOSITY.

About a year ago, my dad began to rely on a walker and announced he was “slowing down.” But that didn’t slow his sense of ALACRITY. A lovely and unsung human quality, Merriam-Webster defines the word as “cheerful readiness.”

After beating me in a quick game of cards on this celebratory day, Dad dressed for dinner in a smart heather blue sports jacket and dark pants. He had reserved the private dining room where he lived at Springhill Senior Living in Erie, Pennsylvania, USA.

I often sing the praises of Springhill’s lovely landscape, carefully designed interior, and host of activities. They nourish residents in body, mind, spirit, and social life. I’m convinced Dad was more durable because he lived there.

The meal theme was Oktoberfest. Between the two of us, Dad and I ordered and shared every item on the menu. My (only) brother and sister-in-law had joined us. We toasted to happy memories of mom and dad with the split of prosecco Dad had carried in a plastic bag.

Only minutes after dinner, in a moment when we were apart, Dad’s cane caught and he stumbled and fell.

I tried to appear calm as I sat with him in the emergency room, where he didn’t hesitate to sign the DNR/DNI (Do Not Resuscitate/Do Not Intubate). We rejoiced when he survived the hip surgery and we could be together again, but his kidneys had insidiously begun to fail.

He passed away peacefully in the night four days later.

So we see: Durable is not forever (as much as I hoped it would be for Dad). We only have one self and one shot at life. It’s up to each of us to keep our selves durable.

Therefore, even if you think AI has better grammar than you do, remember what you have that machines don’t, then DO what makes you human.

I talk more about Dad’s durability and effective aging in general on the How to Super Age podcast.

More on this topic: Durable in the New Resilient

Durable Human founder Jenifer Joy Madden is a certified digital wellness educator, health journalist, child advocate, and mom of three grownup practicing durable humans. Read her books: The Durable Human Manifesto (free download) and How to Be a Durable Human: Revive and Thrive in the Digital Age Through the Power of Self-Design. Visit the Durable Human Shop.