Here in the digital age where anyone can publish anything, emerging authors need to work harder than ever to stand out in the crowd, especially when speaking with an agent or editor. Your approach will make all the difference.

“Professionalism matters,” advised Angela Bole of the Independent Book Publishers Association, setting the tone for PubSmart, a practical new conference about the business side of book publishing.

Since there’s no second chance to make a first impression, PubSmart presenters stressed that authors should speak with confidence and positive energy. “Have a pleasant look, hold peoples’ eyes—and don’t say um,” agent Rachelle Gardner told a rapt audience of authors in a session about how to mingle with industry experts.

But just as important as what you say is where you say it.

During free-form networking time at conferences, workshops and other events, it’s all too common for authors to come at agents and editors pitching like a freight train, spewing forth for minutes at a time without taking a breath. “Editors feel like they are being dumped on,” lamented former Random House/Ballantine editor, Signe Pike. “I can’t think of a time when this has resulted in a published book on my part.”

“Networking doesn’t have to be pitching, and shouldn’t be,” she told me later. “Unless you are sitting across the table from an editor or agent in a formal pitch session, it is not an appropriate time to pitch your book. Networking, on the other hand, can make your career if you can learn to do it well.”

Wikipedia defines the French term je ne sais quoi as “an intangible quality that makes something distinctive or attractive.” Ms. Gardner and Ms. Pike both say authors should strive for this quality they call “likable.” Since agents and editors are human, too, it helps to ask about them—something they’re working on, what they said in a speech, or an item in their bio. Ms. Gardner appreciates inquiries about her dog, Reagan. As she said, “Because you let me talk about me, you’re likable!”

After broaching a conversation with an agent or editor, Ms. Pike suggests continuing to tread lightly: “If the conversation goes well, they may ask you or there may be a natural moment, to say [something like], ‘I’m working on a mystery set in Victorian England. It’s like Sherlock Holmes meets (fill-in-the-blank).’ When you talk about your book, it’s important to have it whittled down to two sentences or so.”

When you are talking to an agent or editor, it’s good to have materials with you, but before handing them over ask, for example, “I brought a business card, would you like it?”

Ms. Gardner also advised having books in mind that are comparable to yours which fit this description: “People who would probably like my book have already read these books.”

In my upcoming book, Cover Your Assets, I quote Soren Gordhamer who writes in his Mindfulness manual, wisdom 2.0, about the importance of gracefully finishing a task. Apparently, after many an author’s book explanation, an awkward silence descends while editors and agents try to discern whether the speaker has indeed concluded. Ms. Gardner suggests you wrap up by elegantly returning the conversation back to the listener with words such as, “Does this sound like something you’d be interested in?”

As flattered as they are with all the attention, Ms. Gardner and Ms. Pike want authors to know there are other VIPs at book-related conferences, including the organizers and—especially—other authors. As Ms. Pike points out, mingling with them can “create a support network of other writers who you can build friendships with, learn from, and exchange ideas with for years to come.” 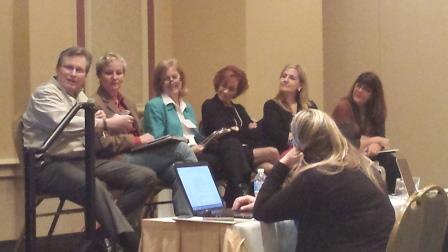 Congratulations for a brilliant foray to the PubSmart founders, seated above to the right of Porter Anderson. From left to right are Bren McClain, Kathy Meis, Jacqueline Gum, Kendra Haskins and Shari Stauch.

Rachelle Gardner is an agent with Books and Such Literary Agency. She represents fiction and non-fiction.

Signe Pike is an author and former book buyer for Random House/Ballantine and Penguin/Plume. Her memoir is FAERY TALE: One Woman’s Search for Enchantments in a Modern World.

In October 2013, Jenifer Joy Madden self-published a “booklette,” The Durable Human Manifesto. She is now preparing the full-length sequel, Cover Your Assets: How to be a Durable Human in a Digital World.  Learn more about the author on Google+.

Thanks, again, Jenifer. Was fabulous having you at PubSmart and look forward to reading more on the Durable Human – great ideas and insights.

Thanks Joy for helping to make PubSmart memorable! And we couldn’t be happier that you found value…and new friends. We hope to see you again next year 🙂 And thanks for the lovely article… we are very flattered!

You all orchestrated a first-of-its-kind event that was completely practical for any author getting started in the business – or who has been out there a while going the traditional route. Glad to report on it so others can benefit from (and know about) PubSmart, too.