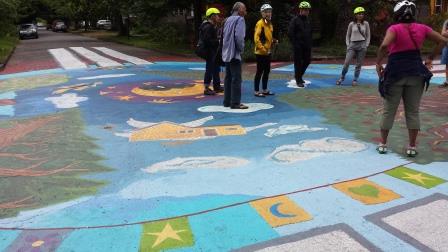 Share-it Square in Portland, OR

In Portland, Oregon, they bike naked in the streets, hold laundromat happy hours, and neighbors adopt their intersections. The place is weird – which is a boon for the people who live there.

I learned a lot about the City of Roses, along with planners, politicians and policy makers, at the International Making Cities Livable conference. In his keynote, Portland mayor Charlie Hales ticked off some of the many ways his town makes its people the priority.

Hales says Portland’s land use and transportation policies “render freedom less dangerous.” With less time worrying about being hit by a car, Portlanders appear to be spending more time coming up with new ideas.

One such resident is 26-year-old Morgan Gary. 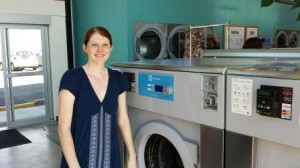 Morgan has always been fascinated by the laundry business. She made reinventing the Laundromat her grad school thesis, which grew into a business idea, that became the Spin Laundry Lounge.

The first thing Morgan did was refurbish a 1950s machine shop and fill it with the world’s most efficient washers and dryers. 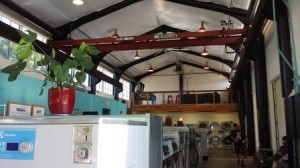 The largest of the Electrolux machines can handle eight loads of laundry and have it washed and dried in 45 minutes. She buys biodegradable detergent in bulk, which her helpers measure out and give to customers for free. In her comfy Spin café, she stocks organic coffee, beer, wine and locally-sourced food. Her “Late Night Laundry” happy hours run from 9 to midnight every Sunday night. 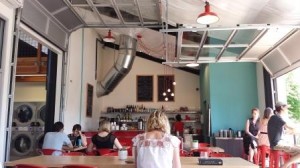 Spin is about sharing resources, saving money and creating community. “It’s the same idea as using public transit or using a Zip car,” Morgan points out. “This way, you don’t have to pay the up-front costs of a washer and dryer or the utility costs, which can be up to 70% of your monthly bill.”

She hopes that once customers experience Spin, they won’t want to go back to their old ways, in her words, “spending your entire Sunday afternoon switching loads of laundry in the basement.” Her goal is lofty: “I’d like to re-create what it means to have a home. You don’t need a washer and dryer.”

Morgan chose Portland for her enterprise because “it just felt right”: “Portland is all about small businesses. They have stood behind me and helped spread the word.”

According to Mayor Hales, Portland deliberately encourages “localism”: “We take time to feed those roots of our success, rather than just picking the fruit.” The Office of Neighborhood Involvement, for instance, has a $5 million budget to support the efforts of 95 Neighborhood Associations and seven District Associations.

We went on a bike tour to see how Portland neighborhoods transform their intersections into gathering places.18 years ago, those who lived within two blocks of Ninth and Sherrett in the Sellwood neighborhood created “Share-It Square,” Portland’s first intersection repair project. 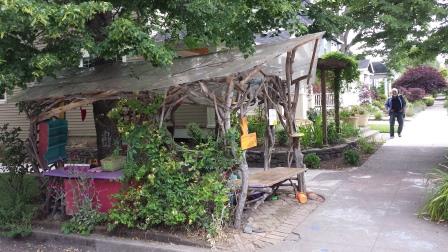 Neighbors came up with a colorful design they painted on the road surface, then built functional, shared goodies on the corners, including a weatherized playhouse and solar-powered tea station.

“There’s dozens of these,” explains Greg Raisman, traffic safety specialist in the Portland’s Active Transportation Department. “And every single one of them is unique because it’s reflective of who’s living there working together.”

Portland is home base for many world-class product and retail designers. While I was in Portland, I teamed up for a book talk with one of them – my son, Brian.  I spoke about the importance of following your curiosity and he showed some photos he’s taken around the world that show how curiosity piques his design thinking. 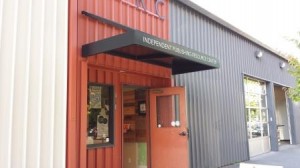 We held our event at the Independent Publishing Research Center, whose mission is “to facilitate creative expression, identity and community by providing individual access to tools and resources for creating independently published media and artwork.” That the IPRC even exists is because Portland indulges new ideas.

In The Durable Human Manifesto, I make the point that if we humans are to retain our edge and continue to contribute in an increasingly digital world, we need to keep coming up with new ideas. To do that, we have to be strong, healthy and durable in body and mind. Portland supports the durability of its residents because it gives them time and safer spaces to follow their unique curiosities and riff off each other and their individual skills.

What Greg Raisman said about neighborhoods that adopt their intersections also applies to Portland and other durable places:

“These are all about bringing people together, giving people the empowerment and freedom to express themselves where they live, and create a special place that reflects who lives here.”

So, yeah, Portland is “weird” by some standards – and thank goodness for it.

To learn more about how to embrace your own nature as you live in harmony with your technology, I invite you to check out the tips and tricks in How To Be a Durable Human: Revive and Thrive in the Digital Age Through the Power of Self-Design. 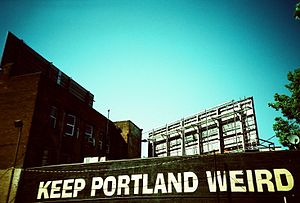 Jen,
Thanks for sharing your IMCL experiences. As a local I was looking to those who came here like Patrick Condon talking about how sustainable the “Flat City” in fact is, and John Massengale on his new book “STREET DESIGN, The secret to Great Cities and Towns” Of course the many others big and small that come together from differing backgrounds to share ideas. So besides what you have said about Portland we are fortunate to have this great conference here. Suzanne Crowhurst Lennard is a true leader. Thanks for coming and sharing your successes!
I am probably the librarian in ” Portlandia” who is afraid of all the weirdness, but in a good way! We come in many sizes and shapes: “What is a city but the people?” – William Shakespeare.
Regards,
Mary Czarnecki

Patrick Condon’s ideas were especially “weird.” So interesting that a city comprised of buildings 6 stories or less could be more energy-efficient than “pointy” cities made up of high-rises.

Yes it’s counter intuitive but true. Weirder still is words like :”human scale” and “compatibility” are being used to describe qualities we need in our city. The concept that Good Economics = Livability is one idea that needs further explaining,as Joel Magnuson.does in his book “The Approaching Great Transformation: Toward a Livable Post Carbon Economy”
Mary