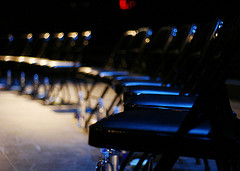 Listen To Your Mother. Although I couldn’t get my mind around exactly what the show was all about, from the moment I heard there were auditions in the D.C. area, I felt compelled to try out. We were directed to a nondescript hotel in the suburbs of northern Virginia. Despite indications that all was legit, my skin was crawling as I knocked on a door at the end of a long hallway on the ninth floor. But show producer Kate Coveny Hood and director Stephanie Stearns Dulli lived and breathed and couldn’t have been more welcoming and reassuring. I tried to stay calm as I delivered a story I wrote about my durable mom for a recent Mother’s Day. A few weeks later, when I learned I was a chosen one, I was excited and terrified. Reality finally struck that I’d be joining fourteen other writers on the stage of a full-sized theater complete with lights, camera and lively audience. Thank goodness, Kate and Stephanie brought us all together beforehand for an informal read-through. Pioneer, business person and parent of eight Elizabeth Hickok Robbins Stone once said that having a child is “to decide forever to have your heart go walking around outside your body.” That night, our hearts’ stories were on parade—some hilarious, some cautionary and some tragic. Elizabeth, who was born in 1801, would have fit right into our eclectic LTYM klatch. As it says in Wikipedia,

On her 81st birthday, four generations of her family attended a party held in her honor where she danced until 5 a.m. and then went home to make breakfast for everyone. An advocate for women’s right to vote, she cast her first at age 93, one year after Colorado women were granted the right. 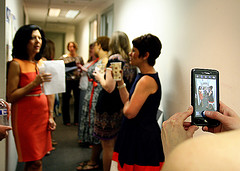 I’m sure it was because of that Kleenex-laden trial run, the performance itself wasn’t as nerve-wracking as I expected. Before the show started we had time to commiserate. During the show, cast members sat together onstage, forming a solid wall of support behind their mates at the microphone. If you’re drawn to try your hand at “Listen To Your Mother,” I encourage you to audition. That alone will show off your creativity and give your guts a whirl and, if you’re lucky, you’ll end up with a fascinating new circle of friends. 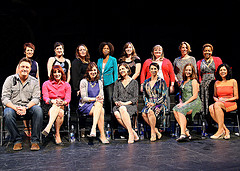 By the way, here’s my performance of “I Want To Be a Nothing.” 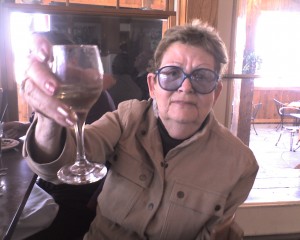 Need inspiration for being your most durable self and raising active, engaged kids? Read the easy, breezy 15-minute Durable Human  Manifesto. Now also a 25-minute Audiobook, complete with the sounds of music, nature, kids, and other happy people!  Learn about this author on Google+.

I love this JJ! Off to share it with the other producers…

Love your re-cap from the questionable audition location to my new circle of friends, I am so glad I took this leap. It has been an experience that continues to sink in as each day passes.

Your writing is so lyrical. I want to be a nothing to!

Thanks, Amy! Back at you on the writing part and you’re way too much Something to ever be a Nothing.