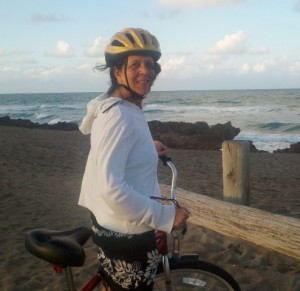 Riding my bike to a meeting the other day, I suddenly realized how happy I felt. Being so close to nature was wonderful, amid crimson cardinals darting through the underbrush and the sound of rushing creeks, but there was more to it than that. I had an exhilarating sense of freedom.

Apparently, that’s not a new feeling for women who bike. In fact, we have enjoyed that special kind of autonomy since the late 1800s, when the bicycle was introduced in America. As suffragette Susan B. Anthony put it, having the ability to ride away from the protective atmosphere of the home “changed women.”

Those and other fascinating tidbits from the history of women and bikes were provided by Sue Macy, author of the book Wheels of Change and keynote speaker at the first-ever National Women Cycling Forum, held this week in Washington, D.C.

The Forum, sponsored by the Alliance for Biking and Walking and  the Association of Pedestrian and Bicycle Professionals, focused on finding ways to get more women comfortable riding bikes. Cornelia Neal of the Royal Netherlands Embassy says it starts with Safety: “If bicycling is safe, people will get on their bike.” She reminded a substantial crowd that her country hasn’t always been the pinnacle of bike mobility. In fact, the Netherlands was once as car-oriented as the U.S. is today. Only after the oil crisis hit in the 1970s, did the country change its policies to make bicycle travel a top priority.

Other speakers agreed that the bicycling industry needs to center less on “mamils,” or “middle-aged men in lycra.”  The thinking was that advertisers need to depict more women cyclists, more bikes should be designed to female tastes, and bike shops should cater more to women’s needs. One panelist said shops could start by “keeping the bathrooms cleaner.”

Because women are “communal,” they also need to cycle, talk and get together, like the Birmingham, Alabama-based Magic City Cycle Chix. “Women-only groups are critical to generating momentum for women” said Veronica Davis, co-founder of #BlackWomenBike, a city of D.C. group which has grown phenomenally in less than a year, as she says here.

“To get women to bike, you can’t operate in a vacuum,” added Davis, saying women need to be involved in advocacy and transportation planning, but also make connections with other government departments like health and land use. “You don’t have people biking to school because half the time schools are all the way across the city.” She advised localities to adopt a “Complete Streets” policy so road facilities provide for all modes of travel and travelers of all abilities.

The sendoff message was short, sweet and not so hard for women or men: “Bike as much as possible.”

When’s the last time you rode a bike?

[…] Rodeo Rustles up Kid Safety";Last time, we saw that being able to bicycle has historically given women a special sense of freedom. Well, kids like freedom, too. Not so long ago, lots of them biked or walked to school and very few […]

I love my bicycle. I even sing a little “I love my bicycle” song when I ride. Unfortunately I don’t ride it often and didn’t know why until I read your post. Women are communal(!) and bike riding feels so solitary to me. Even when I bike with a partner, I can’t really talk to him (like I can when we walk) and I feel pretty much on my own.
I’m going to work on how to feel more connected when biking. A red retro bike w/ basket and bell and flowered seat, deserves its time in the sun! (As do I)

Just ride to somewhere – and you can chat with your partner when you get there! I wish you wonderful times on your sweet red ride, with or without company!