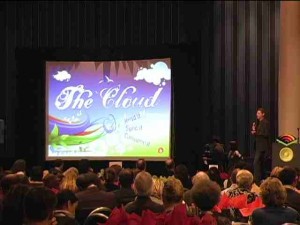 It was reassuring to be at the second-ever Digital Book World Conference, if only to see so many others hurtling forward in the same general direction. We were all a little breathless in the brief time-out from our unexpected digital journeys.

Mine began four years ago, when I had an idea for a book. Ironically, it’s a strategy parents can use to introduce their kids thoughtfully to the online world. I started down the publishing road like everyone else back then: researching the topic, writing a manuscript, sending out proposals. I found out pretty quickly that no one wanted to print tech-related non-fiction – especially by an unknown author.

Then the ground began to shift.

I was at an American Independent Writers conference, cheerless from some face-to-face rejections, when I wandered into a session called “The Online Platform.” We were told that if a writer is going to be successful, she had better have a blog, website and Twitter account. Agents won’t even talk to you, the speaker insisted, unless you come with a posse. Sensing I had no choice (and no posse), I set out to create my digital lasso.

While I was still sorting out the hashtags from the plug-ins, my husband gave me a Kindle and I saw how Amazon was squeezing book-selling like a python. Shortly after that, I stumbled upon the Digital Book World Roundtable.

Each week I would lurk, listening in on Guy Gonzales and his merry band of e-pub pioneers. After a few months, they convinced me the writing on the wall was electronic, so I studded my manuscript with links. Then, last summer – driving between West Palm Beach and Jacksonville – I wrote a script in my head for a companion video. A few months later, as luck would have it, I was able to attend the DBW conference in exchange for doing some interviews and shooting cover footage.

The formal sessions were captivating, as was the time in between. From executives to entrepreneurs – all were happy to share their thoughts.

DBW Innovation award-winner, Hillel Cooperman, showed me how his kids and his parents can read books together on the iPad, even when they’re on opposite coasts.

Author and Wired scribe Frank Rose divulged that he too is “groping” toward understanding this strange, new medium (though his book is published).

I returned home grateful for sipping the nectar of a blossoming industry – and encouraged as I grope my way.

I love digital books. It changed my commuting experience.

You’ll be happy to know the next generation of e-books will be tailored for specific time frames, such as a 45-min. ride on the train. Others will be able to adjust to your learning ability. So, if you’re reading a book about calculus, it will ask you questions and speed up or slow down according to your ability. Thanks for getting in touch.