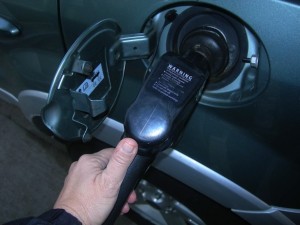 Terrifying nuclear crises, ominous cyber-wars, oil and food prices in a race to the top – if there is a Plan A for saving us from simultaneous global catastrophies, it’s not working. But there is another option.

Enter Lester Brown, esteemed Big Thinker and founder of the Earth Policy Institute. In his new book, World on the Edge, Brown unveils “Plan B” – a sweeping vision to retool the world economy and re-balance earth’s ecosystems so its people can survive. For Plan B to come to the rescue in time, he proposes an immediate about-face in U.S. security policy. Struggles in the Middle East are what could catapult America into action.

Brown calls his plan “the new defense budget, the one that addresses the most serious threats to both national and global security.”  It costs $187 billion, or about one-fourth of the current U.S. Defense budget.

These are the basic building blocks of Plan B:

Keep water flowing and farmland fertile. Right now, many countries are draining the last precious drops from their water supplies. Water tables are dangerously low for half the world’s population. To prevent widespread deaths and mass migrations due to thirst and starvation, Brown’s plan would assist dry countries by helping them conserve water and grow food through efficient irrigation systems and water-efficient crops.

Because so many forests have been cut down and grasslands are being heavily overgrazed, precious topsoil is gone or disappearing in many areas. To prevent future wars over dwindling food supplies, Plan B ends deforestation worldwide and calls for restoring grasslands and the planting of billions of trees. It would also create marine reserves in oceans around the world to provide sustainable and vast supplies of edible fish. In the meantime, an international food reserve would help stabilize prices so everyone has at least something to eat.

Within 8 years, reduce carbon emissions by 80%.  This would be achieved by speeding the shift from worldwide dependence on fossil fuels to the use of the renewable, safe, and limitless energy sources of wind, waves, solar and geothermal. The plan would lower taxes on incomes but raise them on carbon-producing fuels like gasoline. This would push the world toward transportation and manufacturing practices which use less oil and coal. That way, world output of carbon dioxide will drop, slowing the rise of sea and air temperature. Less melting of arctic ice means fewer people and livelihoods would be inundated by rising water.

Re-tool U.S. defense and security. When states are in turmoil, they can’t perform basic functions like collecting taxes, paying their bills or providing jobs. Such instability also threatens global security. As Brown points out, “Efforts to control international terrorism also depend on cooperation among functioning nation states. As more and more states fail, this cooperation becomes less and less effective.”

Brown envisions a new cabinet-level U.S. agency called the “Department of Global Security” which would help shaky countries get back on their feet by providing sustainable security, economic and environmental solutions. In Yemen, for instance, the U.S. and other nation partners could help set up methods for sustainable farming, generating renewable energy and conserving water.

At this time, a large part of the U.S. defense budget is spent on costly conventional weapons. Brown questions the continuing success of this strategy, asking: “What if the next war is fought in cyberspace or with terrorist insurgents? Vast investments in conventional weapons systems will be of limited use.”  Indeed, those days are already upon us. As Michael Joseph Gross writes in April’s Vanity Fair, unprecedented, ultra-sophisticated cyber-attacks waged in 2009 on nuclear facilities in Iran were “the Hiroshima of cyber-war.”  That’s why Brown says now’s the time to re-think defense priorities.

To find out more about Plan B, you can read World on the Edge or watch the film special streaming on PBS.   If you think the idea has merit, share this post with your Congress members and Senators.  It might save billions in the Defense budget, and maybe the planet, too.

The problems in perspective & attitude run all the way down to the small local retailers who can look a Recycling Coordinator in the eye while they say, “No one cares about the trash,” as they are cited for violating a mandatory recycling ordinance.

The majority of US citizenry are not galvanized by the these issues because the effects described are not being felt by the average American. While that implies that we’ll all have to feel like we’re being punished before we change our attitudes, isn’t that exactly how most American businesses have always behaved — cranky about being “over regulated” because they wouldn’t embrace preemeptive behavior change while they could?

The environmental regulatory landscape is becoming more dynamic, which gives you a clue about history repeating itself. I sure would like to see more business leadership on the sustainability front – at every level of business, small and large.

Thanks so much for taking the time to share your thoughts. It is scary how so many people have their heads in the sand about earth-threatening issues. Something that does seem to ring true with many businesses is whether a sustainable practice is proven to save them money (read: increase profits). Sometimes it’s just a matter of re-framing the facts and/or collecting the appropriate data to convince them. I’ve heard of high school science students who’ve done projects where they walk into a shop and immediately start writing a list of sure-fire ways to save energy which the shop owners actually follow. It’s not brain surgery. The hard part is getting in the door – metaphorically or otherwise!

187 billion dollars is a QUARTER of the military fundings??!? Holy cow! The bad thing is that now that we’ve killed Osama, we have to crack down even harder in case some cult rises up in a furious rage of complete revenge. Plan B, as perfect as it sounds, is going to have to stay on hold for another decade or so.