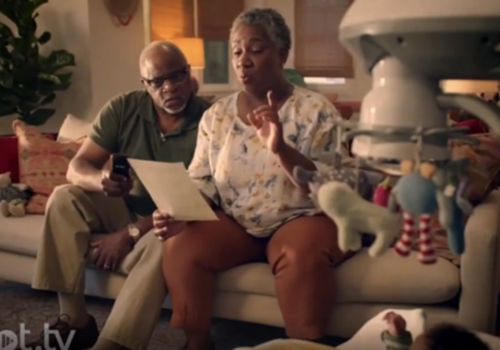 Psychiatrists who care for children and teens are demanding the removal of a Dish Network Prime Video ad because it gives the impression it’s OK to park an infant in front of a TV.

The American Academy of Child and Adolescent Psychiatry’s Media Committee writes in a letter to Dish:

Two grandparents sit on a couch in front of a big screen TV and next to an infant who is motionless in a baby swing. The grandmother reads written instructions from a parent for a “bedtime routine.” She then sets the swing in motion and the grandfather uses a remote to tune to a Prime Video preschool-level program. “We got this!” the duo declares, as they fist bump and an on-camera Dish spokesman eggs them on. The unsmiling baby yawns and stares wide-eyed.

According to the American Academy of Pediatrics policy Media and Young Minds, “For children younger than 2 years, evidence for benefits of media is still limited, adult interaction with the child during media use is crucial, and there continues to be evidence of harm from excessive digital media use.”

The AAP and World Health Organization both recommend that children under 18 months have no exposure to screen media, except for the occasional video chat with loved ones.

“Television exposure has been associated with developmental delays in the cognitive, language and social/emotional domains, as well as increased risk for weight gain and obesity, poorer quality sleep, poor executive functioning, and behavioral problems,” the AACAP letter states.

The AAP also recommends, so children have restful and adequate sleep, screen media should not be in a child’s bedroom, advice which applies to not using screens to distract or lull a baby to sleep.

Iowa pediatrician and state AAP Board Trustee Amy Shriver, M.D. was extremely dismayed by the ad.

“TV is no replacement or “babysitter” for the nurturing human interaction and love of caregivers including parents and grandparents.”

The ad is also under fire for depicting grandparents—all of whom are members of the Last Generation, B.C. (Last Generation Before Cellphones)—as if they don’t know how to care for a baby.

“Grandparents lived, loved, and raised children in a time when screens did not rule our lives. They have the skill set and the unconditional love that make infants thrive. Grandparents do not need the assistance of television, videos, or any screens to love and nurture their infant grandchildren,” Dr. Shriver points out.

“Our experiences recognize a diverse multitude of grandparents whose engagement, commitment, and advocacy is informed by their own child-rearing experiences and intimate understanding of the power of responsive, loving attention and three-dimensional, real-life relationships and experiences.”

It launched the same week as the AAP, AACAP, and Children’s Hospital Association declared a nationwide child and teen mental health emergency.

Kids of all ages are in crisis, but those under under age 6 may be least noticed of all, reports Dr. Mary Margaret Gleason, Vice Chair of the Department of Pediatrics for Pediatric Psychiatry at Eastern Virginia Medical School.

“We have such unmet needs for young children.”

Recognizing and caring for kids’ cognitive and mental health when they are young, adds Dr. Gleason, “could reduce reduce their suffering and the resources needed to help them later.”

A newly-identified developmental condition among babies and toddlers is associated with screen exposure.

Virtual Autism, as the condition is commonly called, is being studied around the world and seems to happen to babies who watch hours of screen media a day.

After months of daily viewing, the affected children begin to lose language skills and may develop autistic-like behavior, such as avoiding face contact and not responding to their name.

Research and comments by parents on this Durable Human Virtual Autism post indicate that symptoms often subside when the child stops all screen viewing and instead has full time face-to-face social interaction with the people around them, along with lots of 3-dimensional full-sensory exploratory play.

Nusheen Ameenuddin, M.D., chair of the AAP Council on Communications and Media, urges caution making conclusions about what may be causing the autistic-like behavior until more study is done.

She does say, however, “We do have good evidence that young children, especially those under the age of 18 months who engage in screen time can have delayed expressive language skills even if they are watching supposedly ‘educational’ videos.”

Dr. Ameenuddin points out that during the pandemic, many parents were in a no-win situation and may have had little choice but use screens to entertain their young children.

“It is not surprising to me that with screens serving as babysitters during very difficult times with limited resources, younger children are not developing the language skills they would otherwise be developing with normal interaction, conversation and reading with adult caregivers.”

Now that kids are back out in the world, however, families need a reset, says Tami Benton, M.D., Children’s Hospital of Philadelphia Psychiatrist-in-Chief and soon to be AACAP president.

“It’s important that, as soon as we can, we start to increase their level of social interaction again.”

Social interaction is especially crucial for babies, whose brain connections occur at an astounding rate and are particularly susceptible to the environment around them.

“Just like vitamins and minerals, positive interactions with caregivers are essential “nutrition” for infant brain growth and formation of strong brain pathways. It is not sufficient to simply sit an infant, toddler, or preschooler in front of a screen and expect them to learn,” asserts Dr. Shriver. 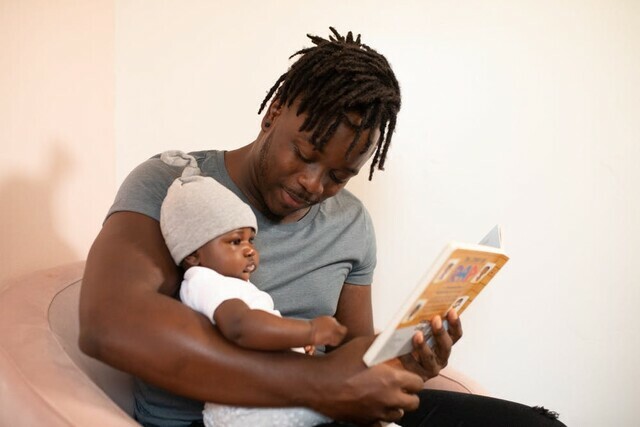 What Babies and Toddlers Need Now

For babies and toddlers to be on a positive developmental track, experts advise their days should consist of:

These AAP resources are available at no cost:

About the author: Jenifer Joy Madden is a Syracuse University adjunct professor of broadcast and digital journalism, a certified digital wellness instructor, founder of DurableHuman.com and parent of three.