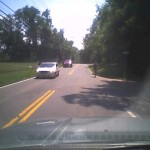 For weeks I dreaded World Carfree Day, held this year on September 22, when we’re all supposed to find other ways to get around. I live near Tysons Corner, a traffic-clogged suburb of Washington, D.C., in one of  America’s most congested regions. Trying to walk the walk for a whole day would not be easy.

The closest bus stop to my house is about two miles as the crow flies, and I’d need to be a crow to get there without driving. I don’t have the guts to walk or bike because the short stretches of sidewalk don’t connect and most of the streets don’t have shoulders. So, Step One was to rationalize I wasn’t cheating if I drove my son the short hop to his high school carpool. Returning to my home office would keep me off the roads a while, but only until his afternoon football game.

The idea of parking and taking transit the four miles over to school seemed fine until the Metro website told me the bus went in only one direction. Service on the 15M line stopped in the middle of the fourth quarter.

Then, in a desperate and underhanded move, I called and asked my cousin if she’d like to come to the game, never disclosing my ploy to get a ride back to my car. Luckily, I went undetected because she had allergies and didn’t want to go outside.

My last chance to go carless was to an evening meeting, three miles from home. But, after more investigation, I found that by the time I dropped off my son, drove to catch the first of two buses and walked the rest of the way, the meeting would be over.

Finally, the Day dawned and it was clear the message hadn’t penetrated the public consciousness as the radio reporter chirped, “Crazy traffic day! We’ll begin in the District – listen up!”

Feeling rather dejected later that night, I wandered over to worldcarfree.net. Turns out Carfree Day is actually a year-round effort to “remind the world that we don’t have to accept our car-dominated society” and “to put it on city planners and politicians to give priority to cycling, walking and public transport, instead of to the automobile.”

Then it hit me. The meeting I had driven to earlier was held by the non-profit Fairfax Trails and Streams. There, a person from the Fairfax County Park Authority talked of plans to make trail connections between communities, parks and transportation. Afterward, an attendee informed the group about a public meeting to dicuss the new Tysons Corner bicycle master plan. And tomorrow, a blurb I wrote about the public buses which serve my son’s school would appear in the parent newsletter.

It was good to realize that even those who have to drive can be part of Carfree Day.

This blog is dedicated to my sister multi-modal maven, Fionnuala Quinn, who lives in the North Virginia car haven known as Fair Oaks.

4 thoughts on “Down and Out in Suburbia on Carfree Day”