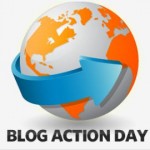 Can one dad who cares about getting kids to ride their bikes to school convince a million kids to do it? Well, Jeff Anderson has had that chance – and why I’m featuring his story on Blog Action Day, whose theme this year is “The Power of We.”

Jeff’s goal is simple. He loved the independence and fun of riding to school and wants today’s kids to be able to do the same. At first, he rode only with his own three kids to their elementary school in a traffic-clogged suburb of Washington, D.C. But soon neighbors began to join in, so Jeff formed a “bike train” of kids, described on The Durable Human two years ago. 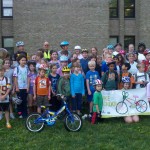 But still Jeff wasn’t satisfied that enough kids were walking and biking, so he and a few others from the grassroots Fairfax Advocates for Better Bicycling aimed higher. In only a few months, we had convinced the nation’s 11th largest school system (with nearly 180,000 students) to endorse International Walk and Bike to School Days for the first time.

But wait, there’s more! Along the way, social media and the Internet created an unexpected synergy. Journalist and bicycling advocate David Darlington found out about Jeff and put a photo of his kids – fresh-faced astride their bikes – smack on the front of his expose, “Why Johnny Can’t Ride.” That caught the attention of Nickelodeon which was planning its annual Worldwide Day of Play (during which the network goes dark for three hours in hopes kids will get some self-directed exercise).

Thus it came to pass that on WWDoP 2012, Nick broadcast a piece on Jeff’s bike train narrated by his oldest child Carina, alongside wellness messages from better-known spokespersons Michele Obama, David Beckham and Apolo Ohno. A Nickelodeon Corporate Communications spokeperson tells me 1.3 million young viewers were watching. More kids will see the segment on the Nick website.

Yet, despite all the hoopla, Jeff still rides with his kids to school a couple of days a week and on a morning each month, rallies the troops. And, any time you should ask, he’s happy to tell you why:

Learn about the author on Google+.

We are expecting another round of teacher layoffs in our district at the end of the year due to budget issues, however, we spend a few million dollars on busses in a district with sometimes fewer distances between schools than Jeff’s two-mile ride. Could this idea, not only reroute us to Durability, but save jobs?!

I think you’ve really got something there! But the key would be to capture the value of the kids’ ability to self-propel to school. Let’s say your school system spent $40,000 installing a sidewalk which eliminates the need for some neighborhoods to be served by a bus and driver. The balance of the bus cost could be retained in the budget and transferred to the line item for teacher salaries (so you could hire more teachers). If you used a grant from Safe Routes to School to pay for the sidewalk, you wouldn’t even have to deduct the $40,000 (love those grants with “free” money that don’t require matching funds!). But that requires being forward-thinking (which is part of being Durable!) That’s also a way that a coordinator who is hired specifically to help a school system find inexpensive ways for kids to walk and bike to school can pay for his or her own position! (which is what we’re trying to do here in Fairfax County)

What a wonderful idea, and I love the commitment to the kids. I bet the lessons they learned will stick with them forever.

Thanks for writing! They surely will. I even like to jump on the train whenever I can swing it!