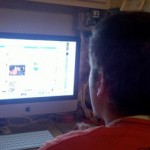 How teens get along within social networks reflects what happens in real life – for good and for bad.

Just as they do face to face, kids love to socialize online. Four out of five online teens hang out on social networks. Some of them may like to tweet or dabble in MySpace, but practically all have a profile on Facebook. “No one had any idea how quickly and or how widely this would spread,” says Stephen Balkam, director of the Family Online Safety Institute which sponsored the new report by the Pew Research Center.

The majority of kids between age 12 and 17 think people are mainly friendly in the digital space. But many, especially black teens, have witnessed mean and cruel behavior. Some younger girls have been so shook up by what they’ve seen, they were worried about going to school the next day.

The most common response to observing meanness is to ignore it. “Parents have instructed kids to stay out of these things to avoid conflict and in-person conflict where things move back and forth from online to physical space,” says Amanda Lenhart, senior researcher on the study.  Her data is from phone surveys of hundreds of teens and their parents as well as focus groups held in the Washington, D.C. in the spring and summer of 2011.

Parents have by far the biggest influence on how their kids behave online. Almost all parents talk to their kids about what’s appropriate to share on the Internet and the proper use of a cellphone. About half the parents surveyed also use computer controls to regulate how their children surf the Internet. But only 1 in 4 sets limits on their child’s increasingly sophisticated cellphone.

Sexting is much less prevalent than has been portrayed.  Only 2% of teens have sent a nude or nearly nude picture of themselves, although 18% have been on the receiving end. Says Lenhart: “There is a lot of knowledge about it but not as much direct experience as you would think.”

Older teens think twice about what they post online.  17 year olds in particular, who have college and jobs in mind, say they have refrained from posting images which might reflect poorly on their judgment and reputations. Balkam observes: “Pew found how much kids are learning how to adapt to the new realities of social network sites.”

Many 12 year olds lie about their age to get on Facebook.  Even though Facebook is off limits to anyone under 13, 45% of online 12 year olds say they have accounts.

Parents are paying attention. Two out of three teens say their parents have checked their Facebook profiles. Many parents “friend” their children, but that doesn’t seem to have much impact on their online social lives, at least while selective blocking remains an option.

So – looking at all this juicy new data – are parents too involved with their kids’ online social lives – or not involved enough?

I spoke with Amanda Lenhart and Stephen Balkam about their new report on November 3, 2011.