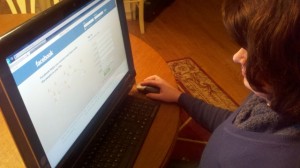 Sometimes parents are their own worst enemies when they “friend” their kids on Facebook.

Thinking back on high school, no one wanted to be embarrassed in front of their friends. So why would we want to bring that on our children?

This week, the Family Online Safety Institute and Microsoft invited top researchers to talk about teens and social media. Turns out that kids tend their Facebook gardens very carefully. “There’s a delight in sharing yourself with others,” said Amanda Lenhart of the Pew Internet and American Life Project, but “they have a specific audience in mind.”

To young Facebook users, the site is a vast public stage. Since they know their every move can be viewed by others, when depicting themselves “the choice is to exclude rather than include,” says danah boyd of Harvard Law School’s Berkman Center for Internet and Society. “There is a high level of encoding. They are going to public spaces to socialize, but they are trying to achieve privacy in a social context where they could never assume they have privacy.”

So, although many nouns, adjectives and explanation points may appear in their profiles, other information is deliberately left out. Teen users speak and behave according to shared mores, often using terms only their peers fully understand.

The last thing they need is for Mom to say something stupid or over-react to a comment which is no big deal to the target audience.

So how to does a parent attain peaceful coexistence on Facebook and other “networked publics”? Sanchez says the first step is to talk with your child–and accept gracefully if you’re asked to watch quietly from the wings.

Though it’s tempting to try to fit in with the younger crowd, Sanchez says we do our children a disservice if we act like one of the kids. As we saw in the last post, Lenhart’s research proves that kids look to parents for digital solace and advice. So we are most useful when we act our age and model sensible behavior—in and out of social networks.

Then again, maybe none of us should be on Facebook in the first place. Also this week, the New York Times hit a nerve with a story called “The Facebook Resisters.”  Scan some of the hundreds of comments, then ask yourself (and comment here): Is being on Facebook worth it?

No, it is not worth the cost of membership! Facebook, is destroying the true art of conversation/social/personal interaction, the face to face interaction that makes us who we are.more important, Facebook is destroying the real meaning of the word “friend” and has created the mentality that is to “de-friend” someone for the most trivial of reasons, sometimes leading to the most serious of consequences. Friend/Friendship, use to mean so much more than a number(1200 friends, 60 pending), now we race to see who can have more friends, followers etc… We see where it got MrsKutcher/or the young girl who committed suicide after being bullies by the mother of a neighbor girl who created a facebook account to deceive and destroy a child . I suggest you post that you are moving and need help Saturday at 8:00am, or you need a “facebook friend” to help clean out your garage next Sunday and let’s see how many of your 1200 facebook friends show up. A wise person once said, when you die, if you can count your true friends on one hand, your rich beyond measure. I guess I am a proud resister who realizes the true meaning of friend and has no need to compete for meaningless numbers and false expectations. As for parents being friended by their children, children should have more important things to attend to, like studying, working and being productive members of society and oh yea, getting up and away from the computer and interacting with real people. People who may or may not want to be friends with them.

In closing, my next rant, will cover why I believe parents, should not only not be their children’s friends on face, but should not allow minors to be on facebook in the first place. Stay tumed it could be a dilly!

Count me among the resisters, Facebook, is not worth the price of admission.