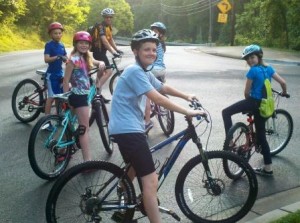 With the arrival of spring, more people are in the mood to give cycling a try. May is packed with bike activities including International Bike to School Day, this year on the 8th. The Safe Routes to School program has a great how-to site for parents who want their kids to be more active, independent and durable in the long run. To that end, I popped some get-started walking and cycling tips over to Activity Rocket, a site which helps parents in the Washington, D.C. area find fun and productive things for their kids to do.

My own love for cycling propelled me to trek to the heart of the city for another May event sponsored by the “Capital Spokeswomen” and the Washington Area Bicyclist Association‘s Women and Bicycles program. “Open Mic Women and Bicycling Night” was described as “your chance to take the stage to share 4 minutes of bike love.” Since cycling is part of my newly-minted Durable Human Manifesto, it was an offer I couldn’t refuse. 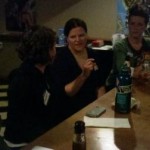 Although we ended up not using a mic and sitting casually around a high-top, the sharing was nonetheless profound.

The first to speak recalled how she collided face-first into the skull of a pedestrian who stepped out from between stopped cars. Despite the accident, the brave story-teller still rides her bike to work and even looked slightly surprised when I called her scar a “badge of courage.”

A bespectacled young woman who’d been listening quietly surprised us all when she disclosed that Capital Bike Share had changed her life. 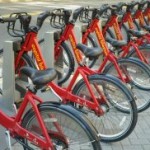 She had been sheepishly scoping out the cherry-red public rides for about a year. Finally one night, when the bus just wasn’t coming, she grabbed a CaBi and rode home. She loved the freedom of flying alone down the street and was dazzled by the sparkling city lights. That one brash move ultimately lead her to become a bike commuter and gave her the courage to give a failing relationship the final heave-ho.

When it was my turn, I read more about freedom from my post about the first Womens Cycling Forum.

In fact, we have enjoyed that special kind of autonomy since the late 1800s, when the bicycle was introduced in America. As suffragette Susan B. Anthony put it, having the ability to ride away from the protective atmosphere of the home “changed women.”

I told the group that for humans to be durable in the digital world, we must continue to be curious, creative, imaginative, intuitive and strong in body and mind. All of that happens through cycling, as I wrote in the Manifesto:

Why is that Durable? When you are self-propelled you are self-reliant, plus you get a taste of the freedom you had as a kid jetting around on your banana seat.

When the person who organized the Open Mic said the Manifesto contained “revolutionary ideas,” I knew my trip downtown had been worth it.

The organizer had her own story. The reason she devotes her career to helping others engage in safe cycling is because of the way she spent her childhood. Starting when she was only six years old, she could always count on her bike to whisk her away from a toxic home environment.

I hope to see most of these folks again at another springtime happening: Bike Fest, a fundraiser for WABA and its efforts to promote “fun, fitness and transportation.” 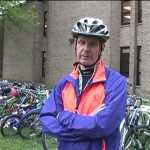 All Jeff Anderson wanted was for his kids to bike, just like he had when he was younger, so he started leading a “bike train” to school not only of his own kids, but a bunch more from the neighborhood. Two short years later, the train had grown so famous it was featured on Nickelodeon’s Worldwide Day of Play.

Learn more about JJ on Google+ and download her Manifesto here.

hey jj, the open mic sounds so fun! i always wanted to start a bike train but we go to a school out of our district, so none of our neighborhood kids are going to the same place as us in the a.m. Claire and i have ridden to school a lot until this spring when suddenly, it’s not “cool.” (she’s in 6th grade). she has agreed to ride for bike-to-school day, however. so i hope the weather’s good!

just requested your manifesto. revolutionary! can’t wait to read it. 🙂

Can’t wait to hear what you think of the manifesto. Also check out the post after this one – talks about starting a bike train or a walking school bus. If you can’t do that, don’t worry. Just keep doing what you can do!