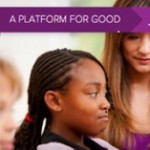 For their children to be durable, it isn’t enough anymore for parents to merely teach them crucial stuff like manners and how to hammer a nail. Add to the list everything to do with Technology. Yet, many view the vast Internet Ocean with fear and trepidation–especially if their kids have already jumped in. This concerns digital instigators such as Facebook, Google and Microsoft who want everyone to feel comfortable and safe in the water. And that’s why they’ve teamed up with the Family Online Safety Institute to teach swimming lessons on a new website called A Platform for Good.

FOSI CEO Stephen Balkam says they will accentuate the positive of what kids do online.

Certainly, PfG’s heart is in the right place, but how does it work in practice?

The homepage is divided into three sections set up vertically—for Parents, Teachers and Teens. By placing Teens at the bottom they’re clearly not worried about Jakob Nielsen’s F-shaped visual tracking theory which claims people don’t usually read down that far.

Adult-written commentaries and blogs are prominent, as are what look like earnest stock photos. Each section has a Resource Center, which consists mainly of links to helpful external tools such as YouTube’s sweet and simple “Playing and Staying Safe Online.”

Google has contributed other outstanding videos hosted by charismatic 14-year-old TED talker Adora Svitak, on topics like “Your homework: Start a Movement!” which is in the Teachers section. But with no Search box, I had to hunt and peck to find Adora.

As for the site’s “interactivity,” a poll asks parents what digital topics they want to learn, suggesting a short list including “new social networking sites” and “filters and parental controls,” but there’s no way to submit ideas.

In the Teens section, visitors ages 13 to 21 could win an Xbox Kinect if, in 140 characters or less, they answer “Tell us what you wish your parents knew about technology!” I wondered if they vetted the site’s language and look with the target audience. “Hey Parents: Get a Clue!” in Comic Sans might play better.

Curious to get his take, I showed PfG to my own teenage guinea pig. Would the site be what Marne Levine, Facebook’s VP for Global Public Policy, calls “the ultimate conversation-starter?” You can read about his rather strong reaction in Part II.

Frankly, I feel quite patronized by what Mr. Balkam is insinuating, that, first, my “fear” might be irrational and not “evidence-based,” and, second, I need corporate tech companies with the assistance of “watch dogs” like FOSI to help me prioritize my parenting. If FOSI wants to provide tips on family internet safety, then go right ahead, but they don’t have to stay up at night worrying about my irrational fears and unwillingness to partake in their privacy takeover. Besides, did they stop to think that perhaps parents aren’t supporting their children’s preoccupation with tech for much bigger reasons than nudity or online predators? No, of course not, we are just dumb ignorant herd members in need of their enlightenment.

The last time I checked 11% was a large enough number to take notice of, especially when it has to do with how many teens post nude photographs, and ESPECIALLY if the number was, say 2% two or three years ago. Can we focus on the rate of increase, instead of the 89% of “good kids”? It’s amazing how these companies will rationalize away a scary stat. “Oh, so, just a few million kids are ruining their future reputations and chances of holding any credible position in society, at least we have more millions who we can sell product to and get hooked on apps and technology that thinks for them …”

This joint venture is nothing more than a “cause marketing” campaign aimed at influencing a generation that knows what true durability means, and “tricking” parents into believing that these companies really give a hoot. This includes trying to target a generation of parents who are confident in what they want to focus on in their own household and what is best for their children.

Sorry Mr. Balkam, I don’t need you to calm me down. But good luck helping out your cohorts with their bottom lines.

Thanks so much, Michele, for your thoughtful reply. The last thing anybody will think is that you are a herd member. It is very encouraging to see the strength of your convictions as a parent that you will go with your gut on these matters, rather than deferring to so-called “experts.” Hope you also read Part II. I have some up close and personal experience with “the 11%” and, from what I’ve found, they’re not all “bad.”