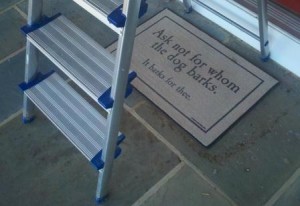 Above my front door is a high window I can’t clean without a ladder. I like to position it so it’s rock steady before I grab a rag and step up. Authors feel the same way about launching their books – and in 2013, there are more ways than ever to secure a sure footing.

When I wrote my first Prospective Author’s Perspective after Digital Book World 2011, it was early days for e-books and it seemed that all of book publishing was in flux. At this year’s DBW, the dust had settled to reveal that content creators have more control – and more options.

Hybrid authors make the most money

The term “hybrid” emerged for the first time to describe an author who does both: self-publish and publish traditionally. Turns out that hybrids are ferocious marketers and make more money than either those who self-publish or those who go the traditional publishing route. That’s according to a new author survey presented by Writer’s Digest Publisher and Community Leader, Phil Sexton.

Hybrid authors have experienced traditional publishing and aren’t too impressed

Hybrid authors see value in being traditionally published, but have some significant gripes:

In case you can’t conjure up the meaning of “metadata,” here you go:

“these are the descriptive tags included in product description and in a lot of cases, embedded in the content file itself of electronic books, that allow a novel to be searchable and discoverable on distribution venues such as Amazon, BN, and Kobo.”

That definition is courtesy of  Kristin Nelson of the Nelson Literary Agency who says it’s essential to keep tabs on your book’s metadata. She told conference attendees that one of her client’s books shot to #1 on Amazon after a tweak of its genre category.

But, she warns, traditional publishers are sometimes too slow to adjust metadata or – worse yet – don’t check it at all after a book is published. That could easily leave your book dead in the water.

Kristin observes that successful self-published authors don’t settle for publishing just one book. They write a variety of content and release content on a regular basis. “If one work is building (and therefore more appealing to the audience), then the author will set aside the other content and focus on what is building momentum. Because the author is in full control of the publishing, she can make that decision quickly and immediately act on it,” she echoed on her blog.

The decision of whether to self-publish is getting easier

In 2013, most authors would consider themselves fortunate to connect with a skillful publisher, perhaps one offering something akin to an Author Bill of Rights. But, if we don’t get lucky, there are new tools at our disposal to assure our books have a firm foundation and good chance of a successful climb.

Five tips for authors about successful book publishing | The Durable Human « Hey Sweetheart, Get Me Rewrite!

We shouldn’t be afraid to learn the techie side of marketing, hybrid authors are making the human/network/(their very own) resources work for them.

Hybrid authors really earn a lot and it would really take time/effort/good story I guess, to become one.

Absolutely. Publishing a book is a lot more complicated than it used to be. It used to be just about words. Now it’s about data and statistics!