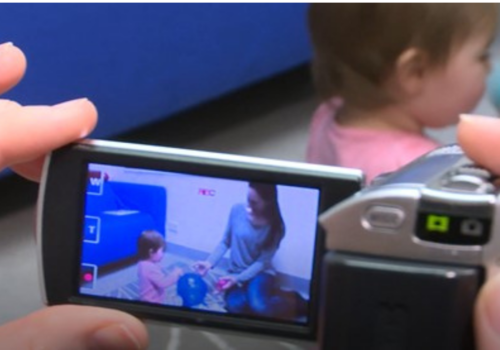 Can autism be stopped once it appears to be started? Yes, according to an Australian study, it may be possible to preempt autism if parents are taught through video feedback how to best engage with their babies.

“We are helping parents fine-tune their parenting to the unique abilities of their baby,” says the study’s lead researcher, Andrew Whitehouse.

The U.S. Centers for Disease Control defines Autism Spectrum Disorder (ASD) as “a developmental disability that can cause significant social, communication and behavioral challenges.”

Autism rates have jumped dramatically in recent years. According to CDC data, 1 in 54 American children are now identified with ASD, while the number in 1975 was 1 in 5,000.

Typically, a child receives an autism diagnosis at about age 3 or 4. Until that time, babies are monitored for changes in behavior and receive usual care.

Researchers at the University of Western Australia wanted to try a different approach: to preempt the condition.

The study identified a group of one-year-old babies who Whitehouse says “were developing a little bit differently.” They displayed autistic-like tendencies, such as difficulty with eye contact or not responding when their name is called.

For half the babies in the study group, the typical wait-and-see approach was used. Parents of the second group of babies underwent “preemptive” video feedback.

“We video parents interacting with their child and go back over the video with the parents frame by frame to help them understand all the beautiful ways their babies communicate,” as Whitehouse explains about the Australian Infant Communication and Engagement Study (AICES).

“We took the approach that babies who are developing a bit differently aren’t getting the social enrichment around them that they require because they process the world in a different way.”

The results of the study: by the time babies whose parents received the preemptive intervention turned age 3, “We had reduced autism diagnoses by two-thirds in that group,” reports Whitehouse.

“We’re helping babies develop a feeling of being perceived and understood and so that they have a greater feeling of back and forth interactions…which are really the foundational building blocks of brain development.”

Some are Simply “Late Bloomers”

In some cases, Whitehouse says, babies in the study were simply “late bloomers.” “They were always going to be on a typical path. They’re just a little bit delayed at the moment so we have to have an intervention that is ethical to deliver to people who may not even need it.”

Increased face-to-face social interaction between babies and caregivers is also corrective for the newly-identified condition known as Virtual Autism.

In that case, toddlers begin to show autistic-like symptoms after months of daily exposure to hours of screen media.

When the media exposure is replaced with full time face-to-face talking, reading and 3-dimensional full-sensory non-electronic play, the children often return to a normal developmental path.

As for the two conditions, “there is converging evidence, without a doubt,” Whitehouse says. “Babies require social enrichment to develop. This is not a good to have, this is a must have.”

The communication strategies taught during video feedback sessions could be useful to any parent, he adds.

“We’ve got a whole lot of whopping distractions that constantly compete for our attention. One of great things of this intervention is that is helps parents to slow down and to understand the wonder that they can experience when they see children through their own eyes.”

Watch the interview with Andrew Whitehouse:

Now that their findings have been replicated, Whitehouse and his team plan to share their techniques with early interventionists around the world.

To learn more about everyday brain enrichment for babies, read this and check out the Durable U parenting course, “Supercharge the Brain and Language Power of Your Baby or Toddler.”

Jenifer Joy Madden is the founder of DurableHuman.com. She is a Syracuse University adjunct professor of broadcast and digital media, a certified digital wellness instructor, and proud parent of three grownup practicing durable humans.