Chalk it up to Reddit, Facebook and Fark for packing them in at the Jon Stewart and Stephen Colbert Rally on October 30. That so many people heeded the digital drumbeat so quickly is a loud wakeup call for D.C. event planners, as I pointed out in The Washington Post.

It paid that day to be a local. Heading out two hours before the rally, my cousin and I planned to take the subway, but when we saw the line, kept driving – to a parking space at her office eight blocks from the Mall. Our luck held when, walking toward the entrance, we spied people stepping through a break in the fence and slipped in behind them.

We were one jumbotron back from the stage. The crowd was blissful, but standing up and packed in like sardines. It was one of the most enjoyable experiences of my life, but looking around, I couldn’t help but worry: what if something spooked the crowd? The city was not prepared.

When Comedy Central filed for a permit September 8, the network estimated 25,000 people would attend. “It had to do with actual space they [the National Park Service] were prepared to allot to the event,” network spokesman Tony Fox told The Durable Human. “We had no idea how many people were going to show up.”

After seven weeks of negotiations – which included the network’s decision not to pay for extra Metro service – 60,000 was the number approved in the final permit just three days before the event.

But even before the network’s eleventh-hour decision to commit, the electronic outreach started. “Reddit[.com] did a donation push to encourage us to do the rally,” Stephen Colbert acknowledged at the post-event press conference. (Fark.com was ticked off he didn’t give social media enough credit for making the rally happen).

Two weeks into the permit process, 100,000 people had RSVPd on Facebook. Then, on October 20, Andres Glusman of Meetup.com told the Christian Science Monitor, “This is growing faster than any online Meetup we’ve seen.” According to Yahoo News, self-organized satellite gatherings were being planned in 801 cities in 67 nations.

All the while, the coolest guys on TV invited viewers across the flat world to a free party in America’s capital.

Comedy Central kept an eye on the online numbers and made some adjustments. On October 25, the Wall Street Journal said the network ordered extra port-a-potties “suggesting organizers expect a crowd of 150,000 people.”

Metro put some extra trains and personnel on standby, but D.C. authorities were reluctant to go much further.  “We did see that there was a large number of people RSVPing on Facebook,” said Park Service spokesman Bill Line. “But we have also found that for prior events, that’s not always an accurate gauge either. People will say they are coming and then don’t.”

In the end, precise aerial images paid for by CBS News showed that 215,000 people attended the rally. That’s not counting the thousands who tried but failed to ride the overloaded public transportation system to get downtown. “It’s kind of fascinating to us,” said the Comedy Central spokesman, “Facebook on the Jon Stewart and Stephen Colbert web sites came out to be 300,000.”

Looking back, it’s clear that DC event planners must re-think the way they do business. Besides reacting more quickly to Internet input, they need to better leverage the permit approval process to compel event sponsors to help pay for support services of all kinds – from extra Metro trains to bike valets.

For their part, private sponsors should get a better handle on attendance, perhaps by asking rally-goers to register in advance and charging a nominal entry fee to cover externalities.

Another problem to reckon with is that during big events on The Mall – like the rally and President Obama’s inaugural festivities – cell phone service is overwhelmed so no one can make or receive calls and texts.

To be able to do its job properly, the National Park Service must be fully informed. Congress banned the agency from making crowd estimates following a political dustup after the Million Man March in 1995. But in the new millennium, computer-analyzed  imaging eliminates the shades of grey which might have prompted politically-motivated lawsuits.

The Washington Post Ombudsman suggested that a media consortium should share the cost of using such technology to make estimates. But since federal authorities already rely on the same imaging techniques for other purposes, Congress should end the ban and allow the Park Service to again be the crowd-estimating agency of record.  (See Comment about capabilities of aerial imaging from AirphotosLIVE.com below)

With enough time and publicity, an event called by a charismatic worldwide figure could end up larger than any one country’s presidential swearing-in.

But Washington certainly isn’t the only place which must cope with increasingly massive crowds.  Last summer, Shanghai was hobbled (shanghaied?) by sheer numbers at its World Expo. Waits at exhibits spanned up to nine hours. 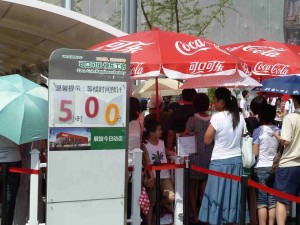 Because of the burgeoning world population, designers and engineers from Rochester, Massachusetts and any other Institute of Technology must work to find better ways to fit lots of people into defined spaces.  Maybe by going to a modular design, an exhibit could have multiple entrances and a five-hour wait could be cut to one.

Like it or not, the headaches of managing huge communities which come together in real-life spaces are here to stay.

Received this comment from the company which did the aerial imaging of the Sanity rally.
-JJM
My firm, AirPhotosLIVE.com did the aerial photography and crowd counts for the Rally for Sanity event you described in your Local Opinion article (11/21/10). More important than the ultimate ‘peak crowd size we calculated was the time lapse aerial data on how and where the crowds surged and swarmed. With this data many of the crowd flow problems can be visualized and avoided in future events.
My firm spent 3 weeks researching and specifically rehearsing for the crowd count at the Colbert Stewart Sanity rally as well as the Beck Palin rally and others. See http://www.AirPhotosLIVE.com
The crowd movement patterns we see from the air are valuable since they help transportation, security, first-responders and even Porta-Potty planners locate and track the flow of the crowd. Some of our perspectives and crowd analysis data is available in near real time for public agencies. This data can be pushed out through the social media outlets you suggest. This could help train loads of people enter the least occupied gates to the National Mall. We used both a tethered surveillance aerostat, the GeoEye Satellite data and our experienced photographer/crowd analyst in the Washington Monument —giving us 3d views of the event from multiple perspectives.
We have a good idea of how and where the crowds surged and are happy to share that site specific data with the DC Metro, the Park Service and other first-responder interests. CBS News has shared our crowd count source data in several formats–see the updated link below.
The Post’s Ombudsman’s suggestion that this type of unbiased, accurate crowd counting service should be used for future events makes most sense for emergency planning and park management. As you nicely say there may be soon be ‘human hurricane’ that can quickly get out of control on the National Mall.
http://photosynth.net/view.aspx?cid=3c6784b6-4e50-4f3a-8fc7-b60cba169384&m=false&i=0:8:0&c=0:0:0&z=628.427947234112&d=-1.20919957615615:-1.20919957615615:-1.20919957615614&p=23.8643524266119

Good way to figure about the figures.

It’s always a shell game when it comes to counting people, whether relying on estimates from authorities, organizers or your own mind’s eye.

I liken it to listening to carnival barkers, auction handlers or tourism officials. It always seems like it’s less than they actually say it is.

I have made the point about the need to put beter transportation demand management protocols in place with regard to special events (albeit partly about biking) for a few years now.

Part of the problem is that the DC procedure is different and separate from the NPS procedure. But both processes need to be upgraded.

And the issue isn’t even about social media, although that makes it sexier maybe, it’s about how to handle the transportation consequences of large events.