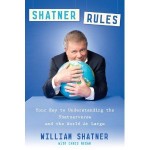 If you ever hear or see anything about William Shatner’s Shatner Rules, do not attempt to avoid it. You will be powerless to resist the book’s black-hole-like magnetism and relentless cross-promotion.

Shatner Rules caught me with something called a “Klout Perk”. As someone who spends too much time on Twitter, I received a peppy little email asking if I’d like a free book about the “Shatnerverse.” I bit on the bait, it arrived in the mail, and I was hooked from the first page.

First of all, it’s funny. The Shatnerisms made me laugh out loud, like when he said “Few are worthy enough to call me an egomaniac!” and described his kidney stone as “an onyx of agony.”

Then there’s the Wow Factor. Did you know Bill Shatner is 80? If you did the math, you could figure that out. But you have to be a pretty huge fan to know he has recorded three albums in his lifetime. On his new release, Searching for Major Tom, Bill belts out Black Sabbath’s “Iron Man” accompanied by renowned heavy metal guitarist Zakk Wylde.

Since Shatner’s been in show business for 75 years, the book is also about acting. If you thought Captain Kirk was his only real role, prepare to be amazed. He’s appeared in productions from major motion picture Judgment at Nuremberg to the 1960s TV series, The Man from U.N.C.L.E. Right now, he has not one, but two talk shows including Aftermath where he interviews such notables as Daniel Ellsburg, Bernard Goetz and Lee Boyd Malvo.

All this is wrapped up in a compact 50,000-word hardcover. I wondered why Penguin USA, a foremost publisher of cutting-edge digital products, would send me a little print book. Well, this no-tech tome is a true marvel of multi-platform marketing. Shatner effectively pushes his Facebook page, commercials and shows on YouTube, music on iTunes, and Twitter feed. He and co-writer, former The Daily Show with Jon Stewart comedy scribe Chris Regan, even have a sneaky trick to get you to www.WilliamShatner.com.

Shatner Rules reminded me why print books still work. In this case, the format controls the game through a clever layout which delivers laughs with maximum impact. Punch lines are often perfectly timed with page turns.

For the mere price of one copy plus postage, Dutton Publicity managed not only to get me to read and write about their book, but also to buy more. The sweet thing about paper books is that they are great keepsakes and gifts. As opposed to my somewhat dour gift choice for last Christmas, this year my loved ones will receive Shatner Rules.

All kidding aside, Bill’s an awesome example of how to wring the most out of life, even when you’re 80.

Shatner Rules: Your Guide to Understanding the Shatnerverse and the World at Large. On sale everywhere October 4.