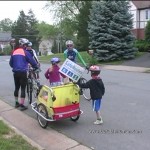 Lots of American kids are following the lead of their parents this week by riding their bikes to work.  Schoolwork, that is.

Take it from Wolftrap Elementary in Vienna, Virginia, which issued a “BikeWalk Challenge” to see how many families would give their kids a chance to walk and roll.

Jeff Anderson, bike aficionado and Wolftrap parent, turned pied piper on wheels by leading a “bike bus” through the neighborhoods.

Besides being fun, walking and biking boost mental and physical fitness, self-esteem and self-reliance, as Jeff explains here:

Jeff’s efforts paid off.   “We had over 230 kids walk and over 50 bike today….which we figured out was more than 50% of the school enrollment,” he is happy to report. Car drop-offs over the week were cut nearly in half.

Of course, kids need to be safe when they bike and walk.  A federal program called “Safe Routes to School” has funding for schools which need sidewalks, crosswalks and other infrastructure improvements.  As long as someone is willing to do the paperwork (and often that’s a parent), the money is free for the asking.

For cash-strapped schools, providing safe routes has another advantage.  Sometimes, simply adding some stripes of paint and a few yards of concrete can clear the way for significant numbers of walkers and completely eliminate the need for costly bus service.

There were lessons to be learned from Wolftrap’s BikeWalk Challenge.  Many families in outlying areas of the school district were unable to take part because there are no sidewalks and it is far too dangerous to dodge cars in the road.  But, on the bright side, a Safe Routes project has been discovered.

Adults who once walked or biked to school remember the freedom of getting around on their own.  Despite today’s fear-laden society, kids need to spread their wings and get outside whenever they can.

“If I had influence with the good fairy who is supposed to preside over the christening of all children, I should ask that her gift to each child in the world be a sense of wonder so indestructible that it would last throughout life.

Those who contemplate the beauty of the earth find reserves of strength that will endure as long as life lasts.”

[…] Jeff Anderson wanted was for his kids to bike, just like he had when he was younger, so he started leading a “bike train” to school not only […]

[…]  Jeff’s goal is simple. He loved the independence and fun of riding to school and wants today’s kids to be able to do the same. At first, he rode only with his own three kids to their elementary school in a traffic-clogged suburb of Washington, D.C. But soon neighbors began to join in, so Jeff formed a “bike train” of kids, described on The Durable Human two years ago.   […]

Well down the day was perfect and the kids were so happy to be able to ride!